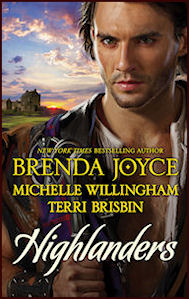 An exclusive Ebook prequel to
A Rose in the Storm

Get swept away by the romance of the Highlands in three historical romance novellas from Harlequin!

The Warrior and the Rose
by Brenda Joyce

Lady Juliana MacDougall prays for her loved ones to survive battle against Robert Bruce…but the battle comes to her when her lands are attacked by a band of Highlanders, including a man wearing the colors of her clan’s worst enemy. Taken hostage by Alasdair Og, Juliana quickly learns he’s as exceptional a lover as he is a ruthless warrior. But how can she ever love Alasdair when he’s her blood enemy?

The Forbidden Highlander
by Terri Brisbin

Honor-bound by an arranged betrothal, James Murray never anticipated falling in love with his intended bride’s dearest friend instead. The passion between James and Elizabeth MacLerie is undeniable, but they are torn between love and loyalty to their clans….

Rescued by the Highland Warrior
by Michelle Willingham

Celeste de Laurent is determined to never again live in poverty. After sacrificing love for a secure marriage, she now stands to lose everything as a widow. Her only hope is to bear an heir—and what better man to father her child, and save her from a terrible fate, than Dougal MacKinloch, the only man she ever loved?

“HIGHLANDERS is a fantastic anthology by three original voices in Scottish historical romance. In all three stories, the romance is wonderfully developed and written with lyrical, moving prose.”
—The Romance Reviews

THERE WAS NO sound in the hall other than that of the two children galloping about on make-believe ponies, waving sticks at one another as if they were swords. Juliana MacDougall adored her little nephews, but just then, she could not smile. She trembled, but not because it was the dead of a cold winter. She could not shake the knot of fear within her.

She glanced across the great stone hall at her sister. Mary was seated at the table, breastfeeding her youngest son, and it was such a beautiful sight that Juliana softened upon seeing it. Mary Comyn was nine years older than she was, yet they were more than sisters; they were the best of friends. Juliana was always thrilled to have her sister in residence with her. And she adored her children, as she had none of her own.

Yet she wished Mary’s current visit was a strictly familial one. It was not She was at Coeffin Castle because the land was at war.

Scotland was at war because she did not have a king.

God, would there ever be a time of peace? Juliana’s temples ached. How she hated war—and how she hated awaiting news of those she loved!

Mary glanced up. She was a very beautiful woman with sky-blue eyes and red-blond hair. Her grace was natural, and it drew both men and women to her like bees to honey. She smiled, the expression warm, yet worry filled her eyes. As she did, she shifted the year-old boy aside and adjusted her surcote. “I will have to wean Thomas soon.”

“Yes, you will.” Mary was expecting her fourth child in the early summer. She was delighted, and so was Juliana. She hoped for a little niece Mary’s small smile vanished. “I cannot believe Buittle has fallen,” she said tersely. Buittle Castle had belonged to John Balliol, a great estate brought to him by his wife. News had just reached them of its fall.

The boys were suddenly shrieking, and violently swiping their sticks at one another. The aching in Juliana’s temples increased and she marched over to them. “Roger! Donald! Enough!”

Laughing wildly, both little boys, aged four and five, paused, giggling at her. Roger was redheaded and freckled, Donald blond. Then Donald raised his stick at her. “A Comyn!” He cried the battle call, shaking his pretend sword threateningly.

“Clearly, you will be a great warrior like your father,” Juliana said, deftly removing his stick from his hands. “But you will soon learn you must not raise your sword—or your hand—to a lady, and especially to your aunt.”

“Good, you should be.” She then took Roger’s stick, as well. “If you must play like barbaric Norsemen, go outside.” Laying the sticks on the table, she sat down beside her sister. “Maybe it isn’t as dire as we think,” she said, speaking in a low tone. But it was dire and she knew it—and not just because of the close ties between their families and the Balliol family. The land was at war because the king had bequeathed his throne to his granddaughter, a mere child, and there were those who would not stand for it.

“Bruce took the royal garrisons at Wigtown and Dumfries—and now he has taken Buittle?” Mary said, ashen. She was referring to the Earl of Annandale, the powerful magnate, Robert Bruce. Last April, he had declared that he was the legitimate heir to King Alexander. It was not the first time he had stated as much. He even claimed that, decades ago, King Alexander had declared him his presumptive heir—but no one believed that.

And just a few months ago, he had taken up arms with his supporters, attacking Dumfries, Wigtown, and now Buittle. Clearly he meant to seize the throne of Scotland.

But he was not the only possible successor to King Alexander. John Balliol had also asserted his legitimate right to succeed to the throne. In fact, a dozen claims had been made from nobles across the land, and even without it—and why not? No one thought, for even a moment, that a three-year-old would ever take the crown. Scotland was, it seemed, ripe for the plucking.

And without a regent, with only six guardians to rule the realm, Scotland had so quickly become divided into bitter and ancient rivalries. The Comyns and the MacDougalls were age-old enemies of the Bruce family, even without their loyalty to the Balliol claim. And Bruce’s most ardent supporter was Angus Mor, Lord of Islay and the Isles. Two of his sons, Alexander “Alasdair” Og and Angus Og, followed him. And Clan Donald was every living MacDougall’s worst enemy. The blood feud went back centuries—when one of Juliana’s ancestors, Dougall, had been murdered by his own nephew, Donald.

Mary’s husband William Comyn had gone to war with their brother, Alexander MacDougall, along with a great many other Comyn and MacDougall kin, to keep Robert Bruce from the throne—in the hopes of one day crowning John Balliol, instead.

“Maybe the news isn’t true,” Juliana said, aware that she was grasping at straws. “Or maybe, as we speak, our forces are taking Buittle Castle back for John Balliol.”

Mary stared at her grimly. “I don’t really care who has Buittle, and I am not being disloyal! I only care to learn that William hasn’t been hurt—or worse.”