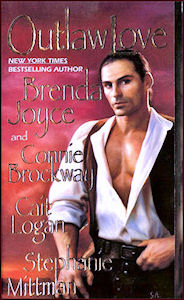 They have captured the hearts of readers with their bestselling, award-winning novels. Now these beloved authors come together in a breathtaking collection of stories that sizzle with raw desire, adventure, and passions as reckless as America’s untamed frontier….

“Sundown” by Brenda Joyce is the story of spinster Emily Anderson. She teaches the local schoolchildren, helps care for her father’s farm, struggles to deal with her mother’s death, and worries about her father’s increasingly frequent drinking. Her days have a dreary sameness–until one morning when she goes to wake her father for breakfast and finds instead a handsome, wounded man in her father’s bed. Raphael Caldwell, accused of robbery and murder, needs a place to hide out, and the Anderson homestead seems as good a place as any. Raphael’s wound heals, but he loses his heart to Emily.

“Would you help me get rid of this beard, Miss Emily…ma’am?”

His tone, she decided, was mocking. Yet somehow it was belligerent, challenging. Then Emily decided she was imagining things. “I think you can wait until the morning,” Emily heard herself say. She walked over to him, still oddly breathless, and placed the tray on the stacked bales beside the kerosene lamp. She was careful not to allow even her skirts to come into contact with him. But she felt his eyes upon her.

“Are you scared?” he asked, his tone flat.

“Of course not. If you haven’t killed me by now, it’s unlikely you’ll kill me at all.”

Emily decided that it was hot in the barn. She realized that she was hugging herself. And that he was holding the razor out to her.

“Very well,” Emily snapped. She took the razor. “You’ll have to sit. You’re too tall.”

“Think I don’t know how small you are?”

Emily looked into his eyes, wondering what he meant exactly. There was something behind his words. He sat down on the bales, gave her a feline smile, and turned his cheek toward her. Emily stared at his perfect profile.

“Well?” he asked softly, glancing very briefly at her.

Emily flushed because he’d caught her ogling him, and she lifted the razor. Only to realize that her hand was shaking.

Quickly Emily dropped her hand. But he’d seen. He turned, his gaze intense.

Her gaze flew to his. When she spoke, her tone was strangled. “This isn’t a good idea.”

It was a moment before he replied. “Yeah, it’s a real bad idea.”

Emily was ready to flee. But before she could take a single step, he caught her wrist. His grasp felt like a manacle. “You have a beau?”

“You have a beau? A sweetheart?” His eyes bored into hers.

Emily tried to jerk her wrist free and failed. Panting, she said, “That’s none of your concern!”

“He ever kiss you?” Raphael asked.

Emily stared at him in shock.

Slowly, not releasing her, he stood. “Guess that’s answer enough.”

Emily’s heart was beating so hard she felt faint. Surely he was not intending what she thought he was!

Emily’s eyes widened. He was asking her?

Emily opened her mouth to reply–to say no– and failed to utter a sound. Images danced through her head, of this man embracing her, kissing her…dear Lord. “Yes,” she whispered.

His eyes softened, then something flared there, hot and bright. He reeled Emily in. As his hands slipped to her waist, holding her loosely now, Emily’s breasts brushed his bandaged chest. She found it distinctly difficult to breathe. She was acutely aware of his hands on her hips, of his chest against hers, and she was even aware of their legs touching, his thighs hard and warm. Raphael bent his head.

Emily did not move, allowing him to feather her mouth again and again with his lips.

And Emily would have never dreamed in a million years that the outlaw could be so gentle. That a kiss could cause so many fluttering sensations, affecting so much of her body. His mouth continued to brush hers, perhaps a dozen times, and Emily finally sighed. Her body was melting, hot and molten, delicious yet coiled up tight, and her fists were uncurling, her fingers spreading over his bare shoulders. Emily wanted to dig her nails into his muscular arms, but didn’t dare. Then Raphael made a sound, the kind of sound Emily had never heard before but recognized now as something both sexual and male. Her own excitement and wonder increased. Her body was feverish and filled with yearning.

Suddenly his grip tightened on her waist. His tongue flicked over the barely parted seam of her lips.

Someone moaned. Emily realized, dazed, that it was herself.

And suddenly she was in his embrace. Every inch of her body was crushed against his. His mouth was on hers, and it was no longer gentle, but greedy and devouring. Emily felt his tongue enter her and fill her, and at the same time she felt his maleness pressed up, rock-hard, against her hip.

Emily knew she should stop him. But she told herself, just a little bit more….

Raphael suddenly gripped her upper arms, hurtfully, and pushed her away. Emily was so surprised that she stumbled. “You had better go,” he said.

Emily did not fall. She clung to the stacked bales of hay for support, met his smoldering eyes. She could not seem to think.

“I’ll sleep in the barn tonight,” he said.

Emily hugged herself. Just thinking about the kiss and the outlaw was making her as feverish as when she had been in his arms. What was happening to her?

And why had he kissed her in the first place? He’d said he didn’t like her. Clearly, Emily decided, he had lied.

Emily stood and walked barefoot across her bedroom to the window. She did not notice the cold. She pulled apart the plain muslin curtains and stared out into the starry night. A half-moon beamed back at her from above the shadowy barn. It occurred to Emily that if the outlaw was thinking about her, too, and he looked toward the house, he would clearly see her silhouetted against her brightly lit bedroom. Of course, he wasn’t thinking about her.

But what was he thinking about?

Emily knew her thoughts had become dangerous. He was an outlaw, a fugitive. He was not the kind of man any respectable lady should think about–especially not the way Emily was thinking about him. And he was almost healed. He could leave the farm, and Aurora, anytime now. In fact, in the morning he might even be gone.

Reluctantly, Emily turned and left the window and climbed into bed. But it was a long time before she found sleep.