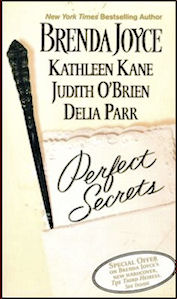 Everyone has one. Everyone loves to hear one. Secrets can last for years, or can be exposed in one shocking moment. And sometimes, secrets can be the perfect thing to bring even the most unlikely lovers together…

From the scorching plains of Texas to the moss-draped riverbanks of Savannah; from a small town in Upstate New York to the sun-baked terrain of the Old West, illusions will be shattered, lives will be changed–and nothing will ever be the same once they’re revealed…

Brenda Joyce brings us the powerful drama “When Dreams Don’t Die.” Blair Anderson, returns to Harmony, Texas for the reading of her father’s will. But secrets and long buried emotions are revealed while the possibility of a new romance is on the horizon.

“As different in character as the authors who penned these tales, the stories in this collection are a joy to read and will fill you with satisfaction.”
–RT Bookreviews

Once, Blair had sworn that she would never return home.  It had been far more than a simple vow, for the pledge had been filled with guilt, despair and anger.

Blair felt all of eighteen again.  Eighteen and lonely and vulnerable and afraid.  And no matter how she reminded herself that she was a grown woman—and a successful one at that—those unwelcome feelings would not fade.  She gripped the steering wheel of the rental car, hardly hearing her daughter, who was chattering away beside her.  The sun beat down on the windshield of the Honda, making it hard to see the highway ahead, in spite of the dark glasses she wore, in spite of the fact that she should know this by heart.  But maybe the glare wasn’t why she couldn’t really see; maybe it was the tears that kept threatening to flood her eyes.  Oh God.  Harmony, Texas was just around the bend.  But it wouldn’t be the same.  Charlotte’s house had been sold five years ago when she passed on.  Faith and Jake were married now, and Rick was dead.

Rick was dead.  Her father, a king among mere men, and the man she had always worshiped and admired more than anyone, was dead.  Blair still didn’t believe it.  She couldn’t believe it.  Her father had been immortal, hadn’t he?  Bigger than life itself.  When he had entered a room, he’d always dwarfed everyone present, and he hadn’t even been particularly tall.  When he spoke, not only had everyone listened, there had always been absolute silence in the wake of his words.  There had been no one more in control of his destiny than Rick Hewitt.  Or so she had always believed.

But Rick was dead.