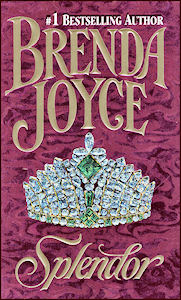 SHE PLAYED A DANGEROUS GAME

SHE WAS A DANGEROUS TARGET

His notoriety, extravagances, and indulgent disregard for social convention fuel Carolyn’s outrage. Nicholas has moved through the balls and soirees of high society effortlessly, a natural target of gossip, envy, and desire. but Nicholas is furious to find himself lampooned by Copperville, and quickly discovers Carolyn’s dearly held secret. Now, as the two spar, a new game begins- a game of deception and pride, of longing and chance.

AND THEY PLAYED FOR THE ULTIMATE PRIZE…

As Nicholas sweeps Carolyn from the teeming streets and gala balls of Regency London to the splendor and majesty of St. Petersburg, against all the odds the unlikely lovers embark upon a whirlwind of passion and peril until there is no turning back- for the stakes have changed, demanding no less of them than the unwavering courage to claim the love of a lifetime.

“SPLENDOR is splendid and gives those seeking a vivid and more powerful romance with an undercurrent of sensuality just what they desire.”
–RT Bookreviews

“Ms. Joyce weaves an epic tale…with characters that take on life. This is a must-read for historical fans. Outstanding!”
—Bell, Book and Candle

“A complex narrative, lots of historical detail and a heroic era–the Napoleonic wars…. Carolyn Browne … is a heroine readers will root for.”
—Publishers Weekly

THE crowd was impatient. Women whispered to one another behind gloved hands and mock fans, diamonds glinting on their throats, dangling from their ears, woven into their coiffed hair. The men shifted, murmured, coughed, their dark evening clothes, piped with satin, shining in the light cast by thousands of candles in the dozens of huge gilt chandeliers overhead. Invitations had specified that the festivities were to begin at nine P.M. and it was now a quarter past. Fifteen hundred guests had already arrived at the prince regent’s palatial London residence, and the ballroom was so crowded that it did not seem possible for there to be any dancing that night. But finally the stream of bejeweled, magnificently gowned ladies and their escorts had slowed to a trickle. From Pall Mall to St. James, the road was clogged with barouches, phaetons, and town coaches. Liveried footmen, hussars, and bewigged drivers waited with craned necks. In the courtyard outside the residence, a Royal Guard stood as still as statues, prepared to deliver a fifty-gun salute. Even the exiled royal French family, the Bourbons, waited with growing restlessness amongst the guests. The regent was intent upon making an entrance, as usual. It seemed that he would succeed.

“You are distracted, Excellency, or you are bored?” a sultry red-haired lady asked.

He turned. He was tall and golden-haired, clad in an officer’s uniform, a dark green jacket with rows of brass buttons and gold epaulets, dozens of medals pinned upon his chest, and pale dove-gray pants. Immediately the man bowed over the lady’s extended gloved hand. “Lady Carradine, you have taken me by surprise,” he murmured, his English flawed with the tiniest trace of some exotic foreign accent.

“Indeed?” She smiled. “I doubt anyone can take you by surprise, Prince Sverayov.”

Nicholas Ivanovitch Sverayov stood a handful of inches over six feet, which meant that he, now, towered over the petite woman facing him. His body was not quite lean, for the fine cut of his uniform suggested a powerful physique. Clearly his shoulders were broad, his legs long. He stared at her out of compelling amber eyes. “I am as human as anyone here.” His lips turned slightly. “Contrary to the recent spate of gossip in your newspapers.”

“Surely you do not read the gossip columns?” She was coy, a smile on her rouged mouth.

“Only when it is unavoidable.”

“Do you know Charles Copperville?” she asked, fluttering her fan. “He certainly seems to know you!”

“If we have met, he has retained his anonymity.” Sverayov’s cool smile did not give any sign of what he might be thinking. “I do look forward to making his acquaintance, though, as soon as possible.”

“I shudder for poor Copperville,” Lady Carradine said dramatically. “Perhaps he will retract the barbs he has made against you, your mission, and your country.”

He chose not to respond. He was a Sverayov, and had centuries of notorious behavior to live down–not that he cared. He was used to gossip and rumors attaching themselves to him wherever he went, for whatever he did, and because of whomever he was currently associated with. Especially at home, where every word, every action, indeed, every probable thought, of a member of the Sverayov family, no matter how far removed, was constantly speculated upon. But he was in England on state business. Technically, England and Russia were at war-and had been so ever since the Treaty of Tilsit of 1807. His reception in London had hardly been warm to begin with, and he did not need a certain satirist named Copperville stirring up more hostility against him. The tsar, Alexander, desperately needed an alliance between his empire and Britain, for Napoleon had invaded Russia three weeks ago after much posturing. Sverayov’s command in the First Army had been turned over to a subordinate, much to his dismay. For he was a longtime personal friend of Alexander’s, and Alexander trusted him completely in this instance.

“Of course,” the very beautiful woman continued, “I cannot imagine you really caring about a single thing Copperville or anyone else has said about you.” She stared him in the eye.

He knew she was referring to the recent spate of gossip, which maintained that Lord Carradine was furious at being cuckolded by that “arrogant foreigner.” Apparently some threats, specific and drunken, had been made against his’ person yesterday evening at White’s. Sverayov was unruffled. Lord Carradine was sixty if a day, quite obese, and according to his wife, very impotent; he was hardly capable of exercising an act of vengeance.

“Perhaps I am less interested in what others think of me than what you think of me, Lady Carradine.” The gallantry was automatic. Lady Carradine was enjoyable in bed, and he expected to be diverted by enjoyable companions in his leisure hours. It was a fact of his existence, and had been since he was a boy.

“Last night you were extraordinary,” she said in a murmur.

He bowed slightly. “As were you.” His reply was meant to keep his options open. But the truth was, he could hardly remember the particulars of their trysts last night or the two evenings prior to that. What was on his mind was Castlereagh’s incredibly stubborn nature, and the fact that he must somehow break the man down. Sooner, not later, so he could return to his command. Time was running out. TheFrench had taken Vilna two days ago. Alexander, who against the judgment of most of his advisors had taken command of all the armies in the field, had himself led his troops in a complete retreat. In effect, Vilna had been abandoned.

“Can I expect you later?” Lady Carradine asked a purr.

He was undecided, and was about to put her off, when, across the numerous heads of the crowd, he saw a couple on the stairs at the entrance to the ballroom, poised to descend. He stiffened, forgetting all about Lady Carradine.

She followed his gaze. “Has the regent finally deigned to join us?” Her words died. She squinted. Her genuine smile was gone. A parody of it remained fixed on her attractive face.

Nicholas did not hear her. He stared at the exquisite, raven-haired woman still standing on top of the short flight of steps. His pulse banged wildly. He could not believe his eyes. The black-haired woman wore a bare silver gown that left little to one’s imagination. She might as well have arrived naked. And although she was petite and slim, her abdomen protruded quite discernibly. He could only stare at her in dumbfounded shock.

“I see you are distracted,” Lady Carradine said, quite evenly. “And I can see why. She is stunning.”

Nicholas did not even look at her. She was pregnant, by God, and she had defied him blatantly by following him to London. He did not know which stunned him more.

But Lady Carradine was not to be put off. “Do you know her, Excellency?” Her smile was forced. “I have never seen her before, and I do know everyone. She must be from the country, or come from abroad.” Her laughter–and the gaze she shot at him–was uneasy. “Surely she is no country mouse.”

Nicholas felt as if he were wearing a stiff papier-mâché mask. “She is my wife.”

Lady Carradine started. “Of course, I assumed you were married. Isn’t everyone? But I did not know she had accompanied you to London.”

And neither had Nicholas. “I beg your pardon Nicholas said, bowing curtly. And then he began to make his way through the crowd.

She had seen him. She smiled, lifting one slender arm to wave a gloved hand at him. And she clung to the arm of her escort, Mikhail Fydorovski, a slim young man who was very flushed.

Nicholas paused and waited for her to come down the steps, aware of the crowd around them. Already he had been remarked, and he could feel people watching him, whispering about him. It was annoying, being in the public eye, but he was used to it. He suspected that within fifteen minutes Marie-Elena’s identity would have been established, and the gossips would go wild. He would not have to be told what they were thinking and saying. Marie-Elena was commonly held to be one of the most stunning women in all of Europe, and they had been told, again and again, that together they made a striking royal couple. An image of their daughter, Katya, flitted instantly through Nicholas’s mind. And with it, as always, there came a deep, profound sorrow.

“Niki, how good to see you, darling,” Marie-Elena cried. She kissed his cheek, brushing her full, mostly bare breasts against his arm. Her eyes were as black as her hair, which made a startling contrast to her flawless ivory skin. She was wearing a diamond tiara in her hair, diamonds and rubies around her neck and numerous diamond and ruby bracelets on top of her gloved wrists. “We have only just arrived,” she said. Her escort had chosen to hang back, allowing them some privacy.

He stared. “Did I not leave you in St. Petersburg? Did I not make it clear that I was going abroad for the sole purpose of state affairs–not the purpose of pleasure?”

“I know what you are thinking,” she said quickly, gripping his arm. “I know you decided against my accompanying you to London. But Katya has been miserable since you left,” she exclaimed in her husky voice.

He started. “What do you mean, she has been miserable?”He did not try to hide his utter concern.

“She cried all night after you left, and no one, not even Leeza, could console her!” Leeza was her old, nearly blind, nurse. “I did explain that you were not going back to the army, but I do not think she believed me. Niki, you know how smart she is. She stopped eating. I grew frightened.” Marie-Elena’s gaze was earnest, holding his.

But very little frightened her, and Nicholas knew it. Just as he knew that his daughter was his Achilles heel…