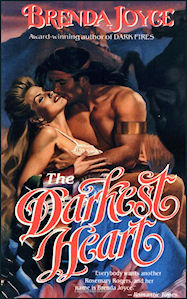 She was called the bell of the Southwest

Beautiful Candice Carter enjoyed the attentions of every eligible man in the New Mexico Territory, until her reckless heart led her to near death in the desert. But rescue came from a savage…Jack Savage, the hard-muscled Indian warrior who both terrified and fascinated her. Suddenly she was at the mercy of an arrogant halfbreed whose forbidden passion she dared not admit she wanted to taste.

He was called Savage

From the moment he saw her, Jack branded Candice his woman. No matter that he had chosen the Indian way…no matter that he could hang for touching her. nothing could stop him from making her his reluctant bride. Vowing to teach her every sensual pleasure, he set out to tame the fiery spirit of the blond beauty who had stolen his soul. But as war raged between the white man and the Apache, he found himself torn between duty to his people and a forbidden love he could not resist and could not live without.

“Everybody wants another Rosemary Rogers, and her name is Brenda Joyce.”
—RT Book Reviews

The New Mexico Territory of the United States—1860

She knew she was dying.

She knew she was dying.  She had seen cattle had died from heat and dehydration.  Their tongues had been grotesquely protruding from their rigid corpses, black and stiff and swollen.  Her own tongue felt just as thick.  She could no longer swallow, there was no saliva left, and she could taste sand and grit.  If only she had water.

The day seemed to get hotter.  Impossibly, unbearably hotter.  She moaned from the pain—a choked, whimpering sound.  She wondered through the torpid haze, how much longer will it take.  She wondered what her brothers and her father would do when they found out.

And she wanted to cry for them, for their grief.

Please forgive me, she moaned silently.  I never wanted to hurt you.

She loved them.  They were her family.  Three big strapping brothers, Luke and Mark and Little John, all close to six feet tall with the blond, blue-eyed Carter good looks.  And her father.  He would be in a frenzy.  He had been in a frenzy since the night she had run away—that she knew without a doubt.  Oh, God.  To think she had been betrayed like this.

At least they would never find out the truth.

She thought she was becoming delirious.  She could Virgil as if he were really there, with her.  But his face wasn’t handsome—it was ugly in rage.  And she could feel the painful blow as he hit her, hear herself cry out, feel his hands, grabbing her…

All her life she had been gloriously spoiled.  Her father had raised her and her three brothers alone.  They had come to the Territory ten years earlier, before it was even a part of the United States.  Her father had abruptly packed them all up, she had her three brothers, when she was eight years old—and they had from their Tennessee farm to Tucson to start over as ranchers.  That was exactly one month to the day that their mother had abandoned them all, running off with another man.

She hadn’t meat to do it, hadn’t  meant to hurt her family.  She was used to the adulations she got from the men in her life, whether it was her father and brothers or the townspeople, the cowboys and drifters.  She wasn’t exactly vain, but it was hard not to know that she was extraordinarily beautiful—especially when everyone kept telling her so.  She had seen a miniature of her mother once, who had also been known for her beauty, and Candace knew that she looked a lot like her.  Oddly, that pleased her.  They both had brilliantly blond hair, long, thick and wavy, enough to stop a man in his tracks without him seeing any more.  Add to that a perfectly heart-shaped face and full, rose-colored lips, a straight, delicate nose and large, almond shaped eyes… Candace had had fifteen marriage proposals last year alone, when she’d been seventeen.

And she had accepted Virgil Kincaid’s

No one had approved.

He was lean and dark and so very handsome.  Candace had been letting mean steal kissed from her for years—nothing more than a few chaste pecks, unless her suitor was really favored, and then she would allow him to brush her lips with his.  She was used to the courting, the cow-eyed looks, and the awkward, endless declarations of undying love.  But Virgil Kincaid took her by surprise.  He was from Georgia, a pastor’s son, he said, and his courtship took her breath away.  His words were honey soft and thickly Southern, he was well read, he could quote the finest poetry… and his looks weren’t cow-eyed but bright and hot.  He was no awkward, bumbling teenage cowboy, stumbling over his words and his eagerness, but a handsome, well breed Southern gentleman, one who knew how to treat a lady.

Her father, approached by Virgil, absolutely forbade the marriage.

The next night they eloped.

They rode hard day and night to make it to Forth Yuma before anyone had to time to follow them.   It was a wonderful adventure, exciting and romantic…

Until Fort Yuma, where Virgil refused to marry her.

“I don’t understand,” she cried, her eyes dark with the betrayal.

He grinned.  His hands closed over her shoulders, pulling her close.  Still dazed, Candice didn’t try to draw away.  “Candice, I’m not a marrying man.”

She stared bewildered from the magnitude of everything—what she’d done, what they’d done, what he was doing now.  “But—I don’t understand.”  She knew she was more than marriageable—she was the most sought after belle from Arizona City to El Paso.

He raised her chin.  “You were made for loving, Candice.  And marriage just isn’t my game.”  His grip tightened.  “God—I want you.  I’ve never wanted any woman as much as I want you.”

It was sinking in.  She tore away.  “You lied!  You promised—you told me you loved me!  You said we would get married as soon as we found a preacher.  I ran away with you!”

He laughed.  “I’m afraid, dear, that you’re going to have to learn to play the game according to new rules.  Mine.”

She backed away.  “What are you going to do?”

Surely, Candice, even you aren’t that naïve?”

She was afraid.  Her back hit the wall of the small room they had checked into.  “God, Virgil—no.”

“I’m going to make you my mistress, darling.  And I’ll make you very happy, I promise.”

She choked in shock.

“Candice don’t look so damn innocent.  You were made to be a man’s mistress, my dear, in beautiful silks and taffeta, diamonds and lace—not some rancher’s wrinkled-up wife.  Come here.”

He reached for her.  Candice didn’t think.  She had never had to hit anyone before, never—not with three strapping brothers to chaperone her.  But now her hand shot out and she sent a ringing slap to his face as hard as she could.  He immediately backhanded her brutally, sending her spinning to the floor, stunned.

“Get it through your head, Candice.  You are no longer Miss Carter, belle of the Southwest.  You are my woman, and you do as I say.”

She raised herself to her elbows, panting, her ears ringing, her face throbbing.  She shook her head once to clear it.  Fear spread icy claws deep into intestines.  “No.”

Her eyes went wide as he threw his jacket casually on the bed and knelt beside her.  Candice scrambled to her knees.  He yanked her back by the waist.  She cried out, writhing.  He clamped an arm around her and flipped her onto her back, hard.  Candice was terrified, and when she looked into his eyes she saw that he was laughing—he was enjoying himself.  With a tremendous effort, she kicked out, one of her feet catching his jaw.

He yelped, releasing her.

Candice crawled frantically toward the door.

“Bitch!” He grabbed her ankles and pulled, hard.

Candice arms went out from under her, and her chin hit the floor, sending a spasm of pain through her.  She was on her stomach, helpless.  Virgil wrenched her hands behind her back, hurting her.  He prodded her legs apart, and sheer terror and sudden understanding coursed through her.  “We can do this any way you want,” he said, panting, as he tossed her skirt and petticoat over her hips.

He was going to mount her as a stallion does a mare.

He released her hands, tore down her pantalets, and grabbed the cheeks of behind.  Candice felt something thick and hard rub against her.

With a desperate cry, she twisted onto her side, legs flailing.  He reached for her hands to capture them, but lost her balance from her frantic motions.  She reached for the gun that was strapped in the holster at his side.  He loomed over her again, his face bright with lust, on his knees between her thighs, his member obscenely enlarged and poking the air.  Candice’s hands closed over the smooth handle of his gun.  In one abrupt movement she wrenched it free.  His eyes widened.  Hers closed—and she fired.