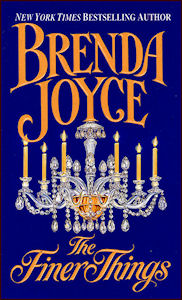 An orphan from London’s East End, a fugitive from the poorhouse, Violet Cooper was tired of sleeping on stoops and being hungry and cold. But she dared to enter a world forbidden to her kind. Even marriage to a gentle, elderly knight and the title Lady Goodwin could not open closed doors, stop the cold stares, or hush the shadowy rumors of murder…

He was a man of the world. The rules of Victorian society did not interest him, nor could a gauche pretender with Cockney accent possibly turn his head. Yet Theodore Blake, second son of the Earl of Harding, was immediately compelled by Violet- and soon found himself defending the vulnerable young widow in the face of a murder investigation. but wedding vows were the only way to save her from certain hanging…

“Readers who relish a sophisticated, stylish read brimming with elegant prose will find this Cinderella story la ‘My Fair Lady’ to their taste.”
—RT Book Reviews

“Very satisfying. You won’t be able to put it down. Ms. Joyce only gets better and better.”
—The Bells & Beaux of Romance

“Ms. Joyce’s books always flow with richness and anticipation. This one is so good I felt transported into the lives of these magnificent characters. The plot is enormously absorbing, the settings are vibrant and the sensuality abounds throughout. I cried and loved right along with the characters.”
—Rendezvous

The Victoria seated two. Its once plush and read leather seats were cracking, and the once shiny brass rails refused to gleam no matter how frequently polished, but Sir Thomas Goodwin would not consider purchasing a new conveyance. Violette did not care. When Sir Thomas had brought his young bride to his home in York six months ago, just outside of the village of Tamrah, she hadn’t noticed the torn leather or the tarnished brass of the Victoria. She hadn’t noticed the excessively faded upholstery in his home, the smoke-darkened, torn wallpaper on the walls. Sir Thomas was gentry, and it had been a miracle that he would call on a mere shop girl, much less take her to wife. In many ways, Sir Thomas had saved her life. In any event, he certainly had changed it drastically.

Of course, Sir Thomas was old enough to be Violette’s grandfather, perhaps even her great-grandfather, and this was his second marriage. His first wide had died a decade ago. But her life had changed from the moment he walked into her shop and smiled at her. He courted her, gently and respectfully. But best of all, Sir Thomas had agree that Ralph could leave London, too, and join them as a servant of sorts.

Sir Thomas drove the Victoria down Tamrah’s single main street, keeping their grey gelding at a walk. Violette kept her chin high as several shopkeepers and pedestrians turned to look at them from the stone sidewalk. Her heart sank a little when she noticed Sir Thomas’s daughter Joanne Feldstone, staring at her from outside the cabinet maker’s. Violette looked away from the older woman’s icy stare.

As first, she hadn’t cared about the difference in their ages. Not really. Marriage was a matter of convenience, a business arrangement. Everyone knew it, and she and Ralph had discussed it at length. Violette had been thrilled to accept the proposal of a gentleman who would take her away from London and the grim life she has always known. She had been thrilled to marry a knight and become Lady Violette Goodwin. Sir Thomas had suggested that she spell her name in the French fashion. Violette couldn’t spell or read, so she did not care. She had agreed.

They had been married for six months. Violette had just turned eighteen.

How she loved York. She loved the countryside, and she loved Goodwin Manor, but she hated this small village. It wasn’t the village itself, which was quaint, with its stone buildings and timbered roofs, and flowers in the windowsill pots. It was that no one here liked her—no one, that is, except for her husband.