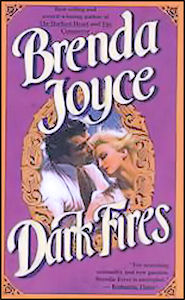 “He murdered his wife,” they whispered. Nicholas Bragg, Earl of Dragmore, was notorious–even after a British court found him innocent. Now they called him Lord of Darkness, as much for his rakish good looks as for his black reputation.

She was an innocent at passion’s gate. Arriving uninvited at the massive stone manor, she shivered with terror–and excitement. Jane Barclay was his ward. Her sunny, innocent nature was in violent contrast to his hot temper. He was wild, explosive, an uncouth Texas rakehell–exactly the wrong kind of man for an English beauty to tame.

Together they would be swept into the dark storm of their passionate destiny…and wild, all-consuming love.

He wasn’t in a particularly good mood.

But then again, the Earl of Dragmore wasn’t particularly well-known for his good moods.

Nicholas Bragg, Lord Shelton, stood staring out of the French doors his wife had insisted on, a letter dangling loosely from his hand.  The vista that greeted him was spectacular:  endless lawns of emerald green carefully, faithfully manicured, thick beds of pink roses, a long, curving graveled drive and beyond, sweeping green hills framed by oaks in the last of summer’s lushness.  The earl was not soothed.  His hard mouth was twisted into an even harder line; the tendons in his powerful brown hand tightened, and he crushed the letter.  “Damn!”

The word was an explosion, and simultaneously he jettisoned the letter in one violent movement.

The earls was clad, as usual, in soft, form fitting breeches, high black boots, a fine cotton shirt carelessly tucked in and open to midchest, ignoring the dictates of Victorian decorum.  As he moved, it became evident that a barely restrained power coursed through his muscles, like that of a cougar or panther.  He paused to stare down at the crumpled letter on the floor, feeling the childish urge to crush it under it under his heel.  But that would not make the letter go away.  Nor would it make her go away.

He cursed his wife, now dead, with no remorse.  The earl strode to the windows, raking a hand through impossibly thick and impossibly black hair—so black it shone blue in the sunlight.  He had too much to do to play nursemaid to some ward, of God’s sake.  He didn’t need this complication in his carefully constructed life.  The harvest was about to begin and he was on his way to Newmarket to look over some breeder bulls.  His stallion, No Regrets, was racing on Sunday next, and by damn if he’d miss that.  He’d intended to spend the following fortnight in London, assuming everything went smoothly on his estates until then. Damn.

How the hell old was she?

The earl savagely retrieved the letter, tearing it as he unfolded it.  His face was nearly expressionless except for the blazing anger in his gray eyes, so pale as to appear silver at times, all the paler because of the dark, and coppery cast to his bronzed skin.  She was seventeen.  Seventeen, for God’s sake, and according to her aunt Matilda, a handful of trouble—which was why they were coming to him.

The earl cursed.  “I’ll put her in with Chad,” he decided grimly.  “She can be of some use in the nursery.”  He briefly question the wisdom of this, a seventeen-year-old girl with his five-year-old son, then dismissed the issue.

His wife had been seventeen when they had first been introduced.

His rage and, it seemed, frustration, grew.  He would not think about that lying, deceitful bitch, who, if the Christians were right, was at this very moment burning in hell.  He laughed, feeling no compassion.  He did not believe in hell—or in God, for that matter.

His stallion was as a dark and big and powerful as its owner.  The grooms of course were used to their lord.  No one batted an eye when Nick leapt up onto the stallion’s broad bare back and urged him into a gallop.  He tore down the drive.  It was graveled and meticulously raked every day; his wife had ordered it so, and the orders still stood, four years after her death, because he did not care enough to change them.  The drive wound for four miles through Dragmore before reaching the main thoroughfare to Lessing and then London.  The earl urged the stallion off the driveway and across a carefully groomed lawn.  He knew his gardeners thought him ignorant.  They thought he did not know that every time he raced his mount across the lawn he tore it up and that they frantically repaired it with sod before he could see the damage.  Nick smiled. It was his lawn.  He’d tear it up if he wanted to.

They took a fat, high stone wall fearlessly, the horse and rider flying effortlessly over as one being.  It was a harmony of motion, a ballet.  Yet on the other the earl instantly checked the steed into a canter, careful to skirt the sheep—his sheep—and later, in the next pasture, careful not to upset the mares with their frolicking foals.  He did not ride through the cornfields.  He never had, he never would.

He returned to the stable, his shirt soaked with sweat and sticking to his powerful torso, his mount blowing heavily.  Grooms came running out to take the stallion.  The earl waved them away.  He walked his horse for thirty minutes, until the two of them were cool and dry.

The head groom, an old man named Willard, watched from a distance, chewing tobacco.  His nephew, Jimmy, twelve and new to Dragmore, also watched his lord, wide-eyed.  “Is it true?”  The lad whispered.  “Is it true what they say?  Is he the devil then?”

Willard spat another wad, watching the earl, whose hand was on the stallion’s velvet muzzle, his head bent low, near the horse’s ears.  It was impossible to see if the man spoke or not, yet the way he walked, it was as if he were in low conversation with the beast.  Willard knew one thing for sure.  The stallion was Satan’s own.  “Maybe.  But don’t be caught talking that way, boy.”

The earl left the stallion and moved swiftly back to the house.  It was a huge affair, with forty or fifty rooms, yet modest compared to the Duke of Marlborough’s manor.  It was hewn of dark gray stone, with turrets and porticoes and many crystal-paned windows.  Roses crept here and there and everywhere—again, his wife.  He’d always preferred the ivy, now long since cut away.

The south wing had been gutted by a violent fire.  Blackened walls, only partially erect, rose up over charred stone and timbers.  Here there was no roof, no turrets, just one lone tower with gaping holes where the windows had been.  It remained a tragic sentinel amid the crumbling, burned-out ruins.  The earl did not even glance at the ashes.