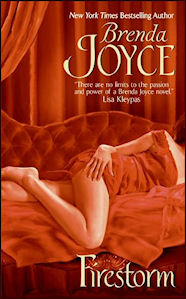 “Brenda Joyce has created characters that will always be remembered in a love story that cannot be forgotten…a wonderful read.”
—Affaire de Coeur

Could she really do this?

Brett sat at the large, leather-topped mahogany desk with a frown of concentration that deepened to a scowl.  He turned the pages of the over-sized ledger.  Damn.  He should have known.  This was the first time he’d made an error in judgment about a man, and hopefully it would be the last.  Furious now, he snapped the book closed and rose to his full six feet, two inches.

He paced to the window and stared broodingly out at the Stockton Street.  He was not going to let his bookkeeper’s theft ruin this day.  A slight smile formed on his ruthlessly sculpted face.  Not that he was being sentimental just because it was his birthday.  But…maybe he was.  Today he was twenty-six, and he had everything he wanted.  His smile widened.

Not bad for the son of a whore.

Not bad for the bastard of a Californio.

D’Archnad did not resemble his mother, who was French, petite, chestnut-haired, and blue-eyed. Instead he was almost an exact replica of his father, Don-Felipe Monterro—tall, broad shouldered, powerfully built, harshly handsome.  And dark, very dark, with nearly black eyes that held little softness and short, crisply curling black hair.

The last time Brett had seen his father he had been graying at the temples, Brett recalled, and instantly grew tense and angry.  A scene flashed through his head, which he tried, but failed, to ignore.

“I’m leaving, Father,” a sixteen-year-old Brett had said, waiting, begging silently for his father to stop him.

The handsome lean man remained emotionless. “Where will you go?”

Brett refused to feel the pain.  He was a fool.  He had never been accepted by his father, had never been more than the bastard in the stable, insurance against the possibility that there would be no more heirs.  Now he was no longer needed.  When he had heard Don Felipe’s new wife’s infant boy begin to cry, he wanted to cry, too.  Instead, his face was as cold and stiff as the don’s.  “I’m going to Sutter’s Ford,” he answered.

“Yes, sir.” He could barely get out the words.

The don gave him a blooded Arabian stallion and few hundred pesos.  Brett rode out that day and never looked back.

Unconsciously, Brett’s fist smashed against the windowsill, the hard planes of his face rigid.  “I won’t look back,” he growled aloud.  “For all I care, the old sonuvabitch is dead.  And good riddance! I don’t need him.  I have what I want—success, respectability…everything.”

From outside his office came a loud crash of breaking glass.

Brett froze, listening, but made no move to leave his large, elegant office.  It was decorated in a classic style with mahogany doors, an Oriental rug in coral and blue, a large sofa in wine-colored leather.  There were two French chairs covered in pinstriped silk, blue velvet drapes, and wall-to-wall bookcases.  His first mistress, Suzanne, had decorated the room for him under his watchful, critical eye when he had acquired the Golden Lady and moved out of his other, shabbier offices in the Miner’s Girl—his first saloon and first investment.

He had to smile, remembering how he had scraped together enough gold dust to buy into a partnership in that sinkhole.  A profitable sinkhole upon which he had founded the wealth he owned today.  He almost laughed.

The Golden Lady was one of San Francisco’s classiest establishments, every inch as plush and elegant as his office.  Even the second floor—where hostesses earned top dollar satisfying their customers—was tastefully decorated.  Because of the lack of women in San Francisco—even now, ten years after the gold rush—city government and society tolerated its houses of ill repute.  Being owner of the Golden Lady didn’t detract from Brett’s reputation, because it was the most elegant establishment in the city.  Then, too, Brett had diversified over the past five years.  He now owned a hotel, two restaurants, a partnership in a shipping line, a freight line, and shares in a ranch across the bay.  He had also acquired land just west of San Francisco, which people were starting to buy and build homes on.  At the age of twenty-six, Brett was one of the wealthiest men in San Francisco.

He pulled a gold watch on a chain from his silver brocade vest.  He had just enough time for a short interlude with Audrey, his current mistress, before meeting his partner in the shipping line, Paul Langdon.  He slipped on a black suit jacket and automatically adjusted his black necktie.  He had just added his black Stetson when another crash and a woman’s scream came from somewhere in the building.

Linda, one of his girls, thrusts open the study door.  “Brett, you’d better—“

He was already striding past her, his face taut.  “What is it?”

“Some loony,” she said, hurrying behind him down the shining waxed floor of the corridor.  “He has a gun, and Susie.”

Brett paused on the threshold of the saloon, which was embellished with rich mahogany, brass, and green velvet.  At this early hour of the afternoon half the chairs were empty.  A dozen men dressed in well-cut suits were standing uneasily at various tables.  The dealers in their brocade waistcoats looked equally wary.  Two of Brett’s girls stood white and immobile at the end of the long bar.  The bartender, James, stood frozen facing the middle of the room.

There on the floor lay Luke, the two-hundred-pound bouncer, his temple bleeding.

A few yards away stood a dirty man in a flannel shirt and muddy boots.  Clenched in a harsh embrace in front of him, the barrel of a gun pressed against her right temple, was Suzie, pale and wet with sweat, her kohled eyes huge.

“No, I don’t think so,” one of his regular customers answered.

“Linda, go get Doc Winslow.”  He didn’t have to look at her to know she was still frozen in the entryway.  “Now, Linda,” he commanded softly.

“I’m going to tend to Luke,” Brett told the man holding Susie.  He started forward, his eyes never leaving Susie and her captor.  The man immediately pressed the gun harder, and Susie cried out.  Brett froze.  “I just want to check his wound,” Brett explained.

Relieved, Brett wanted to look at Luke, but he didn’t dare.  He heard James say from behind him.  “It’s true, boss, I saw it.”

The man turned wild eyes on him.  “You the boss man here?”

Brett momentarily met Susie’s gaze and saw her terror.  He tried to reassure her with his eyes.  Calmly, he asked, “Is that true?”

“This little whore is my runaway wife, and I’m taking her back.  No way you can stop me—but I’d like an excuse you bastard, so just try.”

He had known she was married.  Brett did not sleep with his employee’s, but he carefully screened them all, and when Susie had first come to him he had known he should throw her out instantly.  She was just showing her pregnancy, and her face was bruised from a beating.  But for just that reason, he couldn’t deny her.  He’d given her a warm meal and listened to her plea for work.  There was no way he could hire a pregnant women in his establishment, although he knew that other places would take her.  So, because she was young, and pregnant, and running away from her husband who had obviously beaten her, he had given her a job as a maid.  Because of his support, Susie had asked him to be the baby’s godfather, and Brett had agreed, secretly delighted.

After the baby was born, Susie had gone to work as one of the hostesses, wanting the better money.  He had objected because of her child, which brought back stinging memories of his own youth.  But somehow she managed the child and her job, with help from the entire staff.  Even found himself tending the infant once when suddenly there was no one else available.

Now, as he faced his goddaughter’s father, he remembered vividly how Susie had looked when he had first seen her, and he knew he could not let this man take her and the child away.

“There’s no need for the gun,” Brett said quietly.  “Why don’t you move it from Susie’s temple.”

Bill just stared.  Then there was the sound of footsteps behind him, and Brett saw Winslow pushing through the front doors.  Bill turned to look.  Brett moved.

He leaped at Hawkins, one hand going for his wrist with the gun.  Susie screamed, breaking free and running.

Brett’s years growing up on the streets of Mazatlan had taught him a few tricks.  Though Bill was bigger, they were at a standoff.  The gun went off harmlessly at the ceiling, angering Brett, who was thinking of his chandelier and the hole in the plaster.  He raised his knee, yanking Bill’s gun bearing arm against his leg again.  He knew he was close to breaking the man’s bone, but he didn’t care.  Bill cried out, and the gun fell harmlessly to the floor.  Brett released the arm and delivered a shattering blow to Bill’s face.  The man jerked backward, but Brett caught him and brought him forward as he swung a hard left into his bulging abdomen.  A whoosh of air sounded as Bill crumpled forward.  One more blow did it.  Brett felt the man pass out in his hands and let him thud to the floor.

Brett stood, regaining his breath, then hurried to where Winslow knelt above Luke.  “Is he okay?”

“Gash’ll need a few stitches.  Jimbo, bring me some whiskey.”

One of Sheriff Andrew’s deputies had arrived and was dragging Bill Hawkins to his feet as the blinked groggily.  “You gonna press charges, Brett?” the deputy asked.

“Absolutely,” Brett said.  “How long can you lock him up?”

“How long you want him locked up?”

Long enough to help Susie and the baby, he thought.

The deputy nodded and started out while Hawkins, stumbling alongside, cursed Brett.  Brett watched, then turned to Linda.  “Where’s Susie?”

Brett went after her.  He found her in her room, rocking he daughter, crying.  He sat down on the bed next to her.  “It’s all right now.  He’s been arrested.”

She looked up at him with frightened, glazed eyes.  “Brett, what am I going to do?  He’ll hurt her, I know he will.” She moaned and started sobbing.

Her tears made Brett feel uneasy.  “I’m friends with Judge Steiner,” he said.  “How would you feel about a divorce?”

“I’m sure it can be arranged.”

She hugged him, almost crushing the baby, and he was embarrassed.  “But what about Bill? He’ll be so angry.”

And if that didn’t work, there were always other means.