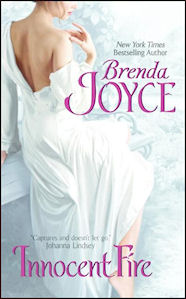 They had stayed in Natchez four days, waiting for her fiance to show up to escort her the rest of the way to his ranch just east of San Antonio. He had not appeared. Miranda was very, very glad, because all she wanted to do was to go home, to France, not England, back to the safety and security of the convent. She prayed, selfishly she knew, that the man her father had betrothed her to had changed his mind.

Miranda was as frightened of marrying this stranger, who had to be a barbarian-he was a Texan, was he not? — as she was of the country she was going to. It was a land she knew of only vaguely from her studies, but upon her father’s startling disclosure, she had made a point of learning all she could about it. Mon Dieu! Her father was banishing her to a wilderness of savage Indians, wild animals, and barbaric men! How could he do this to her!

The shock had come so suddenly. One day Miranda was content-although maybe a bit restless — performing her duties at the convent, and the next she was being sent home, upon her father’s request, with no explanation. She had been reluctant to leave, dreading the thought of seeing her father again, although she had been excited at the prospect of seeing her mother. Angeline had come to visit her several times over the past decade. She had seemed quite different, with a glow on her face, her eyes bright and sparkling. Miranda didn’t understand it. She didn’t understand, either, her mother’s sadness when she’d asked Miranda if she wanted to return home and Miranda had replied that she preferred to remain attheconvent.

Angeline couldn’t have guessed that Miranda would have chosen anything to avoid going home-her childhood memories were vivid and insurmountable. Home was a place of terror. The convent was a haven of comfort, security, and affection. She was loved there, even if she was occasionally the despair of the mother superior, who thought her too curious in some ways for her own good.

There had been nothing but shocks, one after the other. Her father in his study, looking exactly the way he had the last time she had seen him, ten years ago. He was huge and animallike, his face was covered with unkempt growth, and his eyes were red, very red, as if he had been weeping.

“Papa,” Miranda said, curtsying formally. She held in check her fear of this monster — she would never forget what he was. “Is Maman here?”

Miranda started, thinking that her mother had run away again, finally, after all these years.

“She’s dead,” Edward cried in anguish, “She died in childbirth — and God, I killed her! I killed her!” He reached out suddenly and drew her into his embrace. “Your mother is gone!”

Miranda couldn’t believe it-no, not Maman! Not beautiful, gentle Maman! “No!” she screamed, twisting away. “No!”

‘You killed her!” she cried in uncharacteristic rage. She had never felt such rage; in fact, anger of any kind was a totally unfamiliar emotion to her. “I hate you! You killed her! Oh, Maman!” Without waiting for permission, Miranda fled from his study.

Her father didn’t speak to her for a week. Miranda lived in a state of extreme fear. How could she have talked to her Papa like that? He would surely beat her, maybe even whip her-and it was no more than she deserved. She had been rapped on the knuckles a few times by the nuns, when she had been too wordly or too mischievous. And then there was that one time, when she was so young, when her father had struck her. But she had never been beaten before. He was a monster, a beast, like most men Sister Agnes had told her horrible stories about what had happened to her. She had been raped! — not that Miranda knew what that was. She didn’t know anything about the facts of life, she did not know how babies were conceived, she did not know that men and women coupled. But she had heard her father’s agonized, guilt-ridden words: I killed her! Papa had killed Maman! She hated him, feared him, and grieved for her beautiful mother all at once.

Edward called her into his study a week later. He had shaved and dressed neatly, and his eyes were no longer red. His face was lean and hard, and his virility, his magnetism, frightened her. His presence was overpowering. She couldn’t help trembling.

“I have chosen a man for you to marry,” he said bluntly.

“I want grandchildren. A grandson. Your mother would want that, too. You are too beautiful and too rare to rot away in that damn convent.” His dark eyes held hers and she could not look away, although she was stunned by his sacrilegious manner. “If you are at all like her, you will not regret my doing this.”

Miranda couldn’t speak. Her entire world had been crumbling piece by piece, and now lay in ruins around her feet.

“I met him a few years ago. He lives in Texas. He has a ranch, and thousands of acres of land. He is a gentle man, educated, and he will not hurt you. You only have to please him and he will worship you, believe me.”

“You will not change my mind. He is already in love with you. He saw your portrait, the one Angeline gave to me two years ago, and he fell in love. He asked me then for your hand, but you were too young. I told him I would think about it. Last year, I agreed…