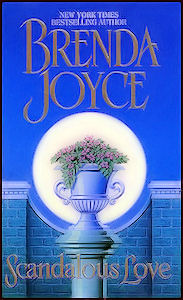 A breathtaking novel of glorious passion and forbidden love.

Rebelliously independent Lady Nicole Bragg Shelton refuses to be constrained by the stifling rules of Victorian England. Desire impels the beautiful heiress toward a shocking liaison with Hadrian Braxton-Lowell, Duke of Clayborough.

Obsessed by Nicole’s daring conduct and sesuality but bound by the dictates of duty and honor to another woman, Hadrian resolves to have the raven haired beauty as his mistress…though never as his bride. But Nicole will be no man’s plaything. She will risk pain and heartbreak to satisfy her wild, uncompromising passion- determined to win the handsome Duke’s unwavering devotion…and his undying love.

“Bewitching and poignant, Scandalous Love is the essence of romance.”
–Affaire de Coeur

“SCANDALOUS LOVE is full of drama, bold characters, emotional scenes, and many unexpected surprises that alternately had me smiling and then near tears.”
–Romance Junkies

Brenda Joyce “is sure to keep you up reading into the night.”
—Milwaukee Journal Sentinel

“But I never have callers,” Nicole protested.

Aldric looked at her, his lined face unfathomable, although his brown eyes were twinkling. “The ladies Margaret Adderly and Stacy Worthington, my Lady.”

Nicole was surprised. Of course, it was an exaggeration to say that she never had callers, for her best friend, the Viscountess Serle, as well as the local gentry and her family, did come calling rather frequently. But they didn’t really count. What counted was the fact that she herself did not have the usual bevy of callers like other young ladies of her class. Not in the past several years. Not since the scandal. What could these ladies, whom she had never met, possibly want?

“Tell them I’ll be right down. Have refreshments served, Aldric,” she told the butler. A bubble of excitement rose up in her.

Aldric nodded, but before leaving he raised one bushy white eyebrow. “Perhaps I should mention that you will be a few minutes, my Lady?”

She understood and chuckled, looking down ruefully at her men’s breeches and muddy riding boots. Although it was almost the dawning of a new era—the twentieth century—women did not wear men’s clothing even when they had just cause. Some things never changed. “Good of you to remind me, Aldric. I shouldn’t chase away my illustrious visitors before I even find out why they’ve come.”

Still chuckling, she waited for Aldric to leave, imagining the shock the two proper ladies downstairs would receive if they saw her attired like a man. It just wasn’t done.

Nicole sighed, honest enough with herself to know that her carefree attitude and rather improper sense of humor did not help her situation—not that she was really in a situation, she reminded herself. After all, she chose to remain in the country. As she riffled carelessly through her armoire for the appropriate undergarments, she admitted to herself that it was nice to have young women come calling. It had been a long time. Not that she wasn’t happy at Dragmore, for she was. Her life was Dragmore, horses and books. It was just that, well, it had been a long time.

Nicole donned a combination, stockings and a petticoat, as quickly as she could. She hated corsets and refused to wear them, even though she was twenty-three and five feet ten inches in her bare feet. She was bigger than most women and then there was her age. She refused unequivocally to try and cinch in her waistline as if she were five feet tall, eighteen years old and a scant hundred pounds. If people knew, they would talk. People loved to talk, Nicole had found out firsthand. But in this instance, no one could possibly know, and even if they did, Nicole was adamant.

It wasn’t just a matter of comfort. Nicole was a voracious reader. She agreed with some of her favorite women authors who favored knickers and bloomers instead of the current fashions, which were, they held, unhealthily constrictive. Like corsets. Just as modem society had invented rules of decorum expressly to keep women in their place, so too it had invented fashions for the exact same purpose.

Nicole was wise enough to know that she should keep her wisdom to herself.

When she had finished dressing she paused one instant to look nervously in the mirror, aware of the tightening knot of anticipation in her belly. She scowled at herself. It wasn’t that she disliked her quiet navy blue jacket and skirt, for she couldn’t have cared less about clothes as long as she was not constricted by them. It was other aspects of her appearance which displeased her.

She sighed. “Well, what did you expect?” she asked her reflection seriously. “To be shorter? To be blonde? What are you, a nitwit? If people judge you by how you look, why, they’re not worth one pence!”

Her door opened. “Are you calling me, mum?”

Nicole blushed. If the servants ever caught her talking to herself she’d never live it down! “Uh, yes, Annie, would you take my breeches to Sue Anne? The left knee needs patching.” She smiled brightly, waiting until Annie had taken up the pants and left. Then she looked at herself with a frown. She was still ridiculously tall and much too dark. She had inherited all of her father’s swarthy looks, and nothing from her petite, blonde mother. She wasn’t morose by nature, but couldn’t her hair have been brown instead of jet black?

She should have asked Annie to help her with her hair instead of making up a story about her britches, she thought, trying to run a comb through it, because the thick, wavy black mass fell to her waist and was untamable without a second pair of hands. It was too late for that now, and Nicole tied it back quickly with a ribbon. The ladies Adderly and Worthington were waiting. Her belly clenched again. If she delayed another minute it would be downright rude. Abruptly Nicole left her room and flew down the stairs, forgetting she was in skirts until she tripped and was forced into a more sedate, ladylike pace.

In the hall below she paused to catch her breath and calm her quivering nerves. She told herself that she was being silly—she was only receiving callers, something other young ladies did every day of their lives. Hurrying down a long, marble-floored corridor, she wished that her mother, the Countess of Dragmore, was home to give her a dose of good advice. But Jane was in London with Nicole’s younger sister, Regina, who refused to remain in the secluded countryside when the season was in full swing. Nicole wished her parents would let Regina get married and forget about the fact that she, the elder sister, was unwed and likely to stay that way forever.