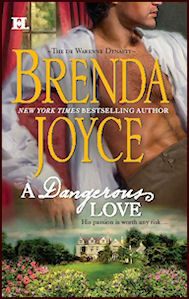 Torn from his Romany mother’s arms as a small boy, Viscount Emilian St. Xavier has spent a lifetime ignoring the whispers of gypsy that follow him everywhere. A nobleman with wealth, power and privilege, he does not care what the gadjos think. But when the Romany come to Derbyshire with news of his mother’s murder at the hands of a mob, his world implodes. And Ariella de Warrene is the perfect object for lust and revenge…

Ariella de Warenne’s heritage assures her a place in proper society, though as a radical and independent thinker she scorns her peers’ frivolous pursuits in the Ton, fashion and marriage. Until a Roma camp arrives at Rose Hill, and she finds herself drawn to their charismatic leader, Emilian. Even when he warns her away, threatening that he intends to seduce and destroy her, she cannot refuse him. For Ariella is just as determined to fight for their dangerous love…

“The tangle of the emotions in this book left me breathless.”
—Coffee Time Romance

“A Dangerous Love is my idea of a historical romance. I don’t think you can get any better than this.”
—Joyfully Reviewed

“A Dangerous Love is an exciting, highly passionate and emotionally charged novel.”
—The Mystic Castle

“My lord, sir?” His butler, Hoode, paused on the library’s threshold. “You have callers.” Hoode handed him a small tray containing several cards.

Emilian was surprised. Callers were obviously rare. His last caller had been a widow with four sons. Her family had blatantly informed him she was a good “breeder.” He had survived that encounter, and now, as he took the cards, he refused to cringe. As wealthy as he was, it was inevitable that, from time to time, marriage prospects were pressed upon him. They were all excessively unmarriageable daughters. The crème de la crème were sent elsewhere to look for blue-blooded English husbands; he didn’t give a damn. He didn’t want children. Childhood was synonymous with misery and fear—and therefore he had no need of a wife, English or not.

He glanced at the cards and became still. The third card belonged to his cousin, Robert.

“This is rich,” he murmured. There was only one reason why his cousin was calling, as they could not stand one another. “Send Robert in, Hoode.” He stood, stretching his tall, muscular frame. He intended to enjoy the ensuing encounter, very much the way a basset would enjoy being locked in a small room with a mouse.

Emilian folded his arms across his chest, refusing any handshake. “Shall we cut to the chase, Rob?”

Robert’s smile faltered—and then he dropped his hand, realizing Emilian would not grasp it. The two men did not look at all alike—Robert looked like a St. Xavier, being so fair, while Emilian had an olive complexion and dark, rich brown hair shot through with hints of gold. “We are passing through,” Robert said in a jovial tone, “and I had hoped we could share a good bottle of wine. It has certainly been some time. And we are cousins!” He laughed, perhaps nervously, or perhaps at the absurdity that any familial affection lay behind the claim. “We’ve taken rooms at the Buxton Inn. Will you join us?”

“How much do you want?” Emilian said coolly.

Robert’s smile vanished. “This time I vow I will pay you back.”

“Really?” He lifted a brow. Robert had inherited a fortune from his father. He had spent every penny within two years. His life was dissolute and irresponsible, to say the least. “Then it would be a first. How much, Rob, do you need this time?”

“And that will last for how long? Most gentlemen can live off that sum for a year.”

“Don’t bother swearing to me.” Emilian bent and reached for his checking book. He should let him starve as he owed him nothing.  Too well, he recalled how Robert and his father had scorned him as “that gypsy boy.” They had called him a dirty savage. But it was only gadjo money—and it was his gadjo money. He ripped the note from its pad and handed it to Robert.

He smiled with disdain. “You owe me. Have no fear—I will never collect anything from you.”

Robert’s smile never wavered—it appeared plastered in place. “Thank you,” he said again. “And would you mind if we spent the night here? It will save us a few pounds—“

Emilian waved at him dismissively. He didn’t care if the trio stayed, for there was plenty of room at Woodland, enough that their paths would hardly cross.  His gaze strayed to the French doors. He stared past his gardens at the rolling wooded hills that etched into the gray, fading horizon. He had a terrible sense that something was about to happen…But it must be his imagination, he thought. Still, he looked at the sky again. Not even a thunderstorm was rolling in.

He turned and glimpsed Robert and two of his equally disreputable friends. Robert was showing them the draft. His friends were laughing and slapping him on the back, as if he had just excelled at some terrific feat.

“It pays to have a rich cousin, eh? Even if he is half gypsy.” The man laughed.

“God only knows how he does it,” Robert grinned. “It’s his English blood, of course, that makes him so wealthy.”

The third man leaned close. “Have you ever had a gypsy wench?” He leered. “Because they’re at Rose Hill—I heard it from a houseman.”

Emilian stiffened in surprise. There were Roma nearby. Had he sensed them all this time?

And suddenly a young Rom, no more than fifteen or sixteen years old, stepped onto his flagstone terrace, staring at him through the French doors.

The young Rom whirled and started to run.

The boy froze at the sharp command. Emilian hurried forward. Continuing to speak in the Romany language, he smiled and said, “I am Rom. I am Emilian St Xavier, son of Raiza Kadraiche.”

The boy appeared relieved. “Emilian, Stevan sent me. He must speak with you. We are not far—an hour by horse or wagon.”

Emilian froze. He was stunned. Stevan Kadraiche was his uncle and he had not seen him in eight years. Raiza traveled with him, as did his half-sister, Jaelle. But they did not travel farther south than the Borders. He could not imagine what this meant.

And then he knew. There was news–and it could not be good.

“Will you come?” the boy asked.

“I’ll come,” he said, lapsing into English. And he steeled himself, but for what, he did not know.