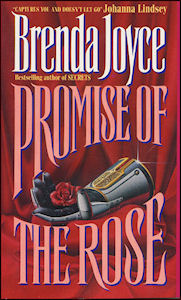 A spellbinding tale of passion, abduction and dangerous love…

She is Mary, the beautiful daughter of the Scottish king—and a unwilling prisoner of the Norman invaders. The headstrong princess refuses to reveal her identity—even if it means sacrificing her virture. But in the arms of a dangerous enemy she discovers a powerful passion and a powerful promise.

Brave and battle-hardened Stephen de Warenne is prepared to defend to the death that which is his by right of conquest—including the golden haired captive who awakens his soul’s most secret yearnings. For theirs is a passion that will not be denied—a magnificent fire that burns hotter and brighter than the blazing flames of war that engulf the land.

“Promise of the Rose a jewel of the historical romance genre.”
—The Mystic Castle

The first few drops of rain began to fall, pattering steadily upon the battlements of Alnwick.

Inside, Mary paused in the open doorway of the Norman’s chamber. She had not considered refusing his summons, even though she was nearly paralysed with fright at the thought of what might happen. He was wearing only his linen braies, and his lack of dress was all the confirmation she needed. Her face paler than the costliest ivory, stung with sudden heat. Mart turned her gaze away from the sight of his hardened loins bursting against the fabric of his braies.

He regarded her without expression. The sound of the rain, now beating determinedly down upon the roof, filled the silence of the room.

Mary’s back was to the open doorway. She cast her around wildly, her heart tripping. She had considered revealing herself to him. Though she had not had much time, less than an hour, to contemplate her dilemma, she brooded over her alternatives as carefully as possible in the face of her growing panic. And until the minute Mary had come to his chamber, confronted with her enemy and his obvious desire, she has harbored desperate hope. She would not accept her ruin, at least not meekly. She had been determined not to bend to his will in the ensuing contest, a contest in which her virtue and her pride were at stake. She would fight him. If she remained firm in her resolve and if she refused to allow herself to be seduced as she almost had earlier, and he had been speaking the truth of his aversion to violence, then he would not condescend to rape her.

But any hope she’d had died a sudden death. Facing him in the flesh, pinned beneath his glittering gaze, she did not believe him capable of desisting from brutality. She knew what her gate would be. For in the end it better to be a martyr, accepting her own ruin, than to reveal herself to be the princess Mary and hand her captor such a priceless gift.

Outside the wind roared, and for the first time that evening, thunder cracked almost directly overhead. Mary jumped.

Stephen said, “Do storms always make you this nervous, mademoiselle?”

Mary looked at him. Her jaw tightened. Lightening sliced across the sky, and for a moment the ink blackness outside the narrow slit became white. Mary turned her gaze away from the narrow window. “Be done with it.”

He was studying her. Mary fought to keep her eyes on the casement window, watching the rain as it fell now in heavy silvery torrents. It wasn’t an easy task. His presence was compelling, over whelming. Her gaze sidled to the canopied bed. He stood in front of it in the middle of the room. The bed curtains had been pulled open, the furs and blankets folded aside.

The chamber was too warm, Mary thought. It was becoming difficult to breathe in a normal fashion. Despite the inclement weather, she wished the fire would die down to mere embers. She wised he would stop staring at her and she wished he would do something, anything, to end this torment, this suspense.

He finally moved. His strides were tightly controlled, giving no hint of the impatience his body must be feeling, as he crossed the room. Thick rugs covered the stone floors, and his bare feet made no sound. He drew her into the chamber, closing the door behind them.

Mary lifted her gaze to his, wide-eyed trembling. There was such finality in his action. She felt as if he had just slammed the door on her fate. Perhaps she had. Determined to remain mute for as long as he, she met his stare, hoping to appear fierce and uncowed.

There was such carnal intent in the curling of his lips that Mary staggered backwards. Stephen easily caught her. And instead of steadying her, he reeled her up against him. “There is no need to be afraid of me.”

“I am not afraid of you—Norman!” Mary gasped. But she was already in his embrace, and his chest was slick and damp against her rigid palms, an indication that he felt the heat, too, and his groin felt like the blunted tip of a sword thrusting against her abdomen. She tried vainly to push away from him.

“Do you think to insult me?” He was amused.

‘Bastard,” she hissed, momentarily ceasing her struggle. She was panting. He was too strong. As she had thought, she was doomed.

“True enough,” he murmured. “I fear I cannot change the circumstances of my untimely birth. Do you really thin to wound me with such words?”

One of his large hands swept down her back. She shivered. ‘Ahh, you are afraid. I know ‘tis too much to ask you to trust me. I will not hurt you, mademoiselle, not after the first time; all woman, even one as small as you, are made to accommodate a man, even one like me.”

Mary’s small breasts rose and fell harshly. His statement summoned up a recollection of his heated touch the day before—and an anticipation she was determined to deny. She would fight him, for martyr or not, that was her clear-cut duty. Her will must be stronger than her body. It must. Mary ground her teeth together. “I—will—fight—you.”

“I don’t think so.” His suggestive—and amused—smile flashed again. “Of course, we can end your dilemma easily enough. You need to speak two words—the name of your father.”

“No!” Mary wriggled against him. He forced her to become still instantly, gripping the firm mound of one of her buttocks. Mary was frozen. “Shall we test your resolve?” he murmured in her ear.

Mary could barely speak, due to the strategic placement of his fingers. “Be—done—with-it.”

For a moment he was unmoving. “An invitation I cannot refuse. Does such acquiescence signal your intention to remain tight-lipped, does it mean that you will forfeit your virginity instead of your identity?”

Mary stared. She had discerned a subtle change in his tone, which was no longer quite so casual; tension rippled beneath the surface of his words. His eyes had grown brighter, his nostrils flared, and his grip upon her had tightened. And still his manhood throbbed urgently against her. He was trying to hide it, but there was no mistaking the heightened pitch of his excitement now. Mary nodded once. She was incapable of speech.

Slowly he smiled. “At this point I should warn you, mademoiselle, my interest in the truth wans. If you will speak, speak now, before it is too late.”

Mary thought dazed, that it was probably already to late. She realized her hand had found his hip. It was hard and free of fat, his skin warm even through the thin linen of his braies. His words sank in. She had to use great effort to remove her hand from his body. “I have nothing to say,” she said hoarsely.

“Indeed?” There was a catch to his voice. Abruptly he lifted Mary in his arms. Mary knew she must make some effort at resistance.

Their gazes locked. Her will dies then and there. She had never known her body could be so hungry. She realized she was holding on to him instead of pushing him away. The blaze in his eyes made her grip tighten.

They were a step away from the bed. Unsmiling, he slid he onto the centre of the mattress. Mary found herself on her back, her gaze, like the rest of her, dominated by him.

“’Tis your last chance,” he said harshly, and she saw that his fists were clenched. “Tell me no lies.”

She was having trouble remembering the issues at stake. She whispered. “I-I am Mairi Sinclair.”

His lips curled. He leaned over her. His gaze slid over her flushed face, then lower, to her heaving breasts, and lower still, to the outline of her slender legs. “The time for words is over, demoiselle.”