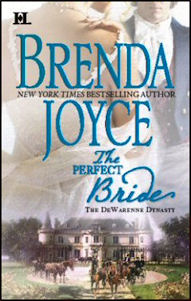 A woman without passion…

A childhood trauma has left Lady Blanche Harrington incapable of all emotion, least of all love. Now circumstance demands she marry, and Blanche dreads choosing from her horde of fawning suitors. For one very eligible gentleman has not stepped forward…

a man without hope.

A war hero and a recluse, Rex de Warenne has long admired Lady Blanche. Though fate and his own dark nature have robbed him of any hope for the kind of future such a lady deserves, Rex is determined to aid her—and keep his feelings to himself. But when their growing friendship leads to a night of shocking passion, Blanche’s newfound memories threaten their fragile love…and Blanche’s very life.

“Joyce’s latest is a piece of perfection as she meticulously crafts a tender and emotionally powerful love story. Passion and pain erupt from the pages and flow straight into your heart. You won’t forget this beautifully rendered love story of lost souls and redemption.”
—RT Bookreviews

“There is passion and pleasure in The Perfect Bride. Rex and Blanche are wonderful characters and I was so pleased to see them find happiness together.”
—Joyfully Reviewed

“The Perfect Bride was an absolute delight to read. In an emotionally packed book Ms. Joyce brought two favored characters together in an unforgettable story”
—The Mystic Castle

Rex sat in the Adare coach, the family coat of arms emblazoned on its doors in red, silver and gold. Julia had not been home.  Not only had she been out, she was not expected back until supper time. Rex had left his card, trying to deny his growing dread. Clearly she had no idea he was in town.

He had decided to call on Tom Mowbray. Dawes had died in that final blast, and the charger had been fatally wounded, but Rex had half carried and half dragged Mowbray through the battle until his men had returned for them. Tom’s wounds, as it turned out, had been relatively light. He had been well enough to be sent back to Britain a week later, and by the time Rex had arrived at the Brighton military hospital, Tom had been released. It felt like years since they had seen one another and Rex hoped Mowbray was doing far better than he was, in every possible way. He hoped he did not suffer from his memories of the war.

Rex settled his crutch on the ground and then swung down, refusing help from the footman. A superior horseman, his balance was usually excellent, but he was still not accustomed to the crutch, which he would have to rely on for the rest of his life, unless she opted for a false leg and a cane. He paused, breathing hard, before swinging decisively across the shell drive, past a huge fountain, and up the front stairs of the palatial home that was Clarewood.

Mowbray was the second son of the Duke of Clarewood. Clarewood was one of the greatest estates in Britain and outranked Adare in far more than title, but in wealth, power and prestige. Rex had never visited Clarewood before, and as he entered the vast round foyer, the floors and walls pale, beige Italian marble, he was dutifully impressed. But then, Tom had admitted that, even as a second son, his own inheritance was huge. And Tom had the title of viscount already, and held the estates associated with it. He had not chosen the cavalry for economic reasons, as Rex had, but for the glamour associated with being an officer in the Dragoons.

Rex was admitted to a large salon with a dozen seating arrangements. Had he been whole, he would have paced. Tom had been with him when he had first been introduced to Julia, and he was hoping he had seen her and had some news about her.

But a half an hour passed. Impatient now, Rex limped outside onto the terrace, aware that the extensive gardens, the elaborate maze, the many meandering paths were truly breathtaking. But he couldn’t really admire the scenery. He decided to leave Clarewood. He would go back to Julia’s and wait for her to return. And then, as he went back inside the salon, he thought he heard soft, feminine laughter.

And dear God, it was laughter he thought he recognized. His heart leapt wildly. Was Julia at Clarewood?

The sound had come from an adjacent room, behind closed doors. It did not occur to him to hesitate. He pushed open the door to his left, revealing a grand piano and two rows of gilded chairs. And he saw the couple standing in a passionate embrace beyond the piano.

He instantly recognized Tom, wondered who his paramour was, and then he waso disbelieving.

Julia was kissing Mowbray. She was kissing him back enthusiastically—without inhibition. Her blond hair fell in disheveled strands about her face. The way they were entwined left no doubt as to the extent of their affair. Julia and Mowbray were lovers.

He could not breathe. His lover—the woman he was taking to wife—and his friend—the man whose life he had saved—were intimately involved.

And then the kiss was broken, both lovers still unaware of his presence. Shock began. Julia was as a slender woman, and she wore a full skirted dress, but Mowbray had his hands on her waist, pulling the dress tight. Rex saw the protrusion of her stomach. The mound was small but Julia was with child and there was no doubt about it!

He had been with her over the holidays when he was home on leave. How far along was he? Was the child his? Or had she been cuckolding him even then?

And the black rage began.

Julia turned to stare at him, her smile vanishing, her gray eyes filling with alarm.

Mowbray approached quickly, smiling. “I can explain! I was going to call on you, Rex, and do just that! Please, do not jump to conclusions!” He started to clasp his shoulder. “We are in love!”

Forgetting he relied on a crutch now, Rex swung his fist at the other man. Mowbray went down—and so did Rex.

He cried out in fury and pain, landing on the damned stump of his leg, his crutch skipping across the floor. Mowbray and Julia were lovers. The extent of their treachery overcame him and he could not move. With it came heartbreak, and it overshadowed his physical pain.

“I am sorry,” Mowbray said quietly, above him, standing now and offering his hand. “Let me help you up.”

Rex pushed himself to sit, pain exploding in his amputated leg. “I saved your life,” he said harshly. He seized the crutch but wondered if he could manage to get up from such an awkward position.

“I love her,” Mowbray said. “And we are married, Rex. I was going to tell you soon.”

Rex could only stare. He was beyond disbelief. He glanced at Julia—and saw pity in her eyes. He did not recognize her now.

He rose to his to one knee and the stump and one hand, holding the crutch awkwardly now. He did not look at either of them—he hoped to never set eyes on either one of them again. “Whose child is it?”

And Rex looked up, incredulous, repulsed. He did not know.

“It is Tom’s,” Julia said, her tone high but firm.

Shoving hard at the floor, he somehow lunged up to his foot and the crutch. “Good.”

He would look at neither of them now. He limped out.