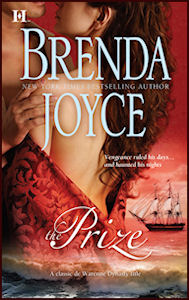 Vengeance ruled his day and nights.

An infamous sea captain of the British Royal Navy, Devlin O’Neill is consumed with the need to destroy the man who brutally murdered his father. Having nearly ruined the Earl of Eastleigh financially, he is waiting to strike the final blow. And his opportunity comes in the form of a spirited young American woman, the earl’s niece, who is about to set his cold, calculating world on fire.

Born and raised on a tobacco plantation, orphan Virginia Hughes is determined to rebuild her beloved Sweet Briar. Daringly, she sails to England alone, hoping to convince her uncle to lend her the funds. Instead she finds herself ruthlessly kidnapped by the notorious Devlin O’Neill. As his hostage, she will soon find her best-laid plans thwarted by a passion that could seal their fates forever…

Love conquered them both…

“A powerhouse of emotion and sensuality, The Prize weaves a tapestry vibrantly colored with detail and balanced with strands of consuming passion and hatred. Joyce writes lush stories with larger-than-life characters and a depth of sensuality and emotion that touches chords within the reader and keeps them coming back for more.”
–RT Bookreviews

“Old School-style settings, plot and alpha hero macho posturing make “The Prize” a delicious treat for readers who like their romance super-spicy, tempestuous and packed with “Oh, no. He didn’t do that again” heartache.”
—Michelle Buonfiglio

“Once again, Brenda Joyce brings us a beautifully written, and exciting story in the de Warenne Dynasty with The Prize. The characters have a life of their own, head strong Virginia and her equally determined hero Devlin are a match made in heaven. Their passion and romance woven with history is brought to life as only the incomparable Ms. Joyce can do.”
—The Mystic Castle

“Brenda Joyce always delivers. You can never go wrong with her name on the cover”
—A Romance Review

They were being attacked!

Virginia knelt upon her berth, her gaze glued to the cabin’s only porthole, gripping a strap for balance as the ship bucked wildly in response to the boom of more canon than she could count. She was in shock.

It had all begun several hours ago. Virginia had been told that they were but a day away from the British coastline, and that, at any time, she might soon see a gull wheeling in the cloudy blue skies overhead. Soon afterwards, a ship had appeared upon the horizon, just a dark, inauspicious fleck.

That speck had grown larger. She was racing the wind—the Americana was tacking slowly across it—and it appeared that the two ships would soon cross paths.

Virginia had been taking sun on the ship’s single deck, and had quickly become aware of a new tension in the American crew. The ship’s commander, an older man once a naval captain, had trained binoculars upon the approaching vessel. It hadn’t taken Virginia long to realize they were worried about the identity of the approaching ship.

“Send up the blue and white signal flags,” Captain Horatio had said tersely.

“Sir? She’s flying the stars and stripes,” the young first officer had said.

“Good,” the captain had muttered. “She’s one of ours, then.”

But she wasn’t. The frigate had sailed within fifty yards of them, maneuvering herself to the leeward side so she rode below the Americana, when the red white and blue American flag had disappeared, replaced by nothing at all. Virginia had been ordered below. The crew had scrambled to the ship’s ten guns. But Virginia hadn’t even made it to the ladder when a canon had boomed once, loudly but harmlessly, the ball falling off to the side of the stern.

“Americana,” a voice boomed over the foghorn. “Close your gun ports and prepare to be boarded. This is the Defiance speaking.”

Virginia froze, clinging to the dark hatch that would take her below, glancing back at the other ship, a huge, dark, multi-masted affair. Her gaze instantly found the treacherous captain—he stood on a higher, smaller deck, holding the horn, his hair blindingly bright, as gold as the sun, a tall, strong figure, clad in white breeches, Hessians and a loose white shirt. She stared at him, briefly mesmerized, unable to tear her gaze away, and for one moment, she had a very peculiar feeling, indeed.

As if nothing would ever be sane or right again.

Time was suspended—she stared at the captain, a creature of the high seas—and then she blinked and there was only her wildly racing heart, filled with fear and panic.

“Hold your fire,” Captain Horatio cried. “Do not close the gun ports!”

“Captain!” The first officer cried with panic. “That’s O’Neill, the scourge of the seas. We can’t fight him!”

“I intend to try,?” Horatio snapped.

She glanced wildly around as the captain of the Defiance repeated his demands that they surrender to be boarded. An interminable moment followed as the crew of the Americana hastily prepared to fire. And suddenly the sea changed. A huge blast of too many canons to count sounded, the Defiance firing upon them, clearly realizing their intention. The placid seas swelled violently as the ship bucked and heaved, hit once or many times—Virginia could not know—and as someone screamed, she heard a terrible groaning above her.

She turned and glanced upwards and cried out.

Horatio was yelling, “Fire!” but Virginia watched one of the Americana’s three masts and all its rigging toppling slowly over before crashing down on several gunners. Several canon now fired again from the Defiance, but not in unison. Virginia didn’t hesitate. Lifting her skirts, she raced to the fallen men. Three were crushed and alive, one was apparently dead. She tried to heave the mast, but it was useless. She grabbed a pistol from the murdered sailor and ran back to the hatch that went below.

She could not breathe. She scrambled down and into the tiny cabin which she shared with the merchantman’s only passengers, a middle aged couple. In the small, cramped and dark space below, Mrs. Davis was clutching her Bible, muttering soundlessly, her face stark with terror. Virginia had glimpsed Mr. Davis on deck, trying to help the wounded.

Virginia gripped her arm. “Are you all right?” She demanded.

The woman gazed at her with wild terror, clearly unable to hear her or respond.

More canon boomed and Virginia heard wood being ripped apart as they were clearly hit again. Virginia leapt onto her narrow berth, grabbing a hanging strap for balance, and stared at the attacking ship through the porthole. The Americana lurched wildly, and she was almost tossed from the bunk.

How could this be happening? She wondered wildly, aghast. Who would attack an innocent, barely armed and neutral ship?

Mrs. Davis began to sob. Her mutters took on sound—Virginia listened to familiar prayers and wished she had remained silent.

What would happen next? What did that terrible captain want? Did he intend to sink the ship? But that would not make sense!

Her gaze moved instinctively back to the quarterdeck where he stood so motionlessly that he could have been a statue. He was staring, she knew, at the Americana, as intent as a hawk. What kind of man could be so merciless, so ruthless? Virginia shivered. Officer Grier had referred to him as the scourge of the seas.

The she stiffened with real fear. The Defiance’s decks, a moment ago, had been frenzied with activity. Now, the gunners at the canon and the men in the masts were still. The only activity was a number or sailors climbing down into two rowboats that were tied to the frigate’s hull. Her gaze flew back to the captain with real horror; he was sending a boarding party.

Now the Americana had become eerily quiet. Virginia already thought that Horatio would not surrender, and nor would she, if she were in command. She checked the pistol to find it primed and loaded.

“Dear Father who art in Heaven,” Mrs. Davis suddenly cried. “Have mercy on us all!”

Virginia could not stand it. She turned and seized the other woman’s arm savagely, shaking her hard. “God isn’t here today,” she cried. “And he sure as hell isn’t going to help us! We’re being boarded. They must be pirates. We are losing this battle, Mrs. Davis, and we had better hide.”

Mrs. Davis clutched her Bible to her bosom, clearly paralyzed with fear. Her mouth moved wildly now, forming words, but no sounds came.

“Come,” Virginia said more kindly. “We’ll hide down below.” She knew there were lower decks, and hoped they could find some small cranny to hide in. She tugged on the other woman. But it was useless.

Virginia gave up. Pistol in hand, she climbed back to the main deck and saw the first of the rowboats approaching. O’Neill stood in the bow behind his men, his legs wildly braced against the seas, as the dingy approached. Virginia hesitated. Why the hell wasn’t anyone shooting at him?

If she had a musket, he’d now be dead.

Her fingers itched, her palms grew clammy. She didn’t know what range the pistol she held carried, but she did know it didn’t have much range. Still, he was getting closer and closer and why wasn’t Horatio firing upon him?

Virginia could not stand it. She rushed to the rail and very carefully, very deliberately, took aim.

With some finely honed instinct, perhaps, he turned his head and looked right at her.

Good, she thought savagely, and she fired.

The shot fell short, plopping in the sea directly before the rowboat’s hull. And she realized had she waited another minute or two for him to travel closer, she would have got him after all.

He stared at her.

Virginia turned and ran around the first hatch and to the one that the seamen used. She scrambled down the ladder, realized she was in the sailor’s cramped, malodorous quarters—was briefly appalled at how horrid they were—when she saw another hatch at the far end of the space. She lifted that and found herself descending even lower below the sea.

She didn’t like being below the ocean. Virginia couldn’t breathe and panic began, but she fought it and she fought for air. Not fat from the bottom of this ladder was an open doorway, through which was utter darkness. Virginia wished she’d had the wit to bring a candle. She went cautiously forward, but quickly, and found herself in a small hold filled with crates and barrels. Virginia crouched down at the far end and realized she still held her pistol, now useless, because in the midst of battle she hadn’t thought to grab any powder and shot.

She didn’t toss it aside. Her eyes adjusting to the darkness, she reversed it, holding the barrel now in her right hand.

Then her knees gave way. He had seen her take a shot at him.

Of course, she hadn’t been able to make out his features, so she was guessing as to his reaction to her sniper attempt, and if she were very lucky, he hadn’t seen that miserable shot.

What would happen now?

Just as Virginia realized that the puddle of water she had been standing in was slightly higher—and she prayed it was her imagination—she heard shots begin—musket fire. Swords also clashed and rang. Her gut churned—the pirates had clearly boarded. Were they now murdering the American crew?

And what was her fate to be?