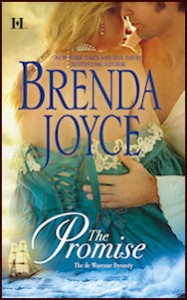 After a record breaking sail from China, Alexi de Warenne’s moment of triumph quickly vanishes.  At his welcoming party, his bewitching childhood friend Elysse O’Neill begins flirting with a shipmate, clearly punishing Alexi for his time at sea.  But when Alexi finds Elysse desperately struggling in the man’s arms,, tragedy ensues.  Within days, Alexi weds her to save her honor—and leaves her to forge a new life.

Elysse de Warenne rules the ton with her wit and grace, but the whispers of “abandoned bride” follow her ruthlessly.  Elysse will never reveal the truth:  that she hasn’t see her husband in six years—and they didn’t even consummate their marriage!  When Alexi unexpectedly returns to England, Elysse will do whatever it takes to win his heart and claim her place at his side.

“Brenda Joyce’s characters are charged with passion, desire, jealousy and anger as she carries the reader on a very turbulent journey.”
—Romance Novel News

“This is an amazing story of love, tragedy, triumph and putting the past away to have happiness and a new beginning. I would recommend this book especially if you enjoy adventure, romance, and new beginnings.”
—My Book Addiction

“Longtime Joyce fans know to expect the unexpected and that this multitalented author will often pay homage to the genre by recreating, in her style, a classic romance. The Promise takes the traditional theme of “second chance at love” and adds timeless plot points (lost love, pride, abduction, murder) to craft an abiding romance that faithful readers and those new to the genre will savor. ”“
—RT Bookreviews

“I should love to go to the docks, for it sounded like a very good race is at hand. According to my reports,” Carew said, “only a few leagues separated both vessels.”

Elysse managed, “Was a third or fourth ship espied anywhere upon the horizon?”

She wet her lips, wishing she could think clearly. She was only certain of one thing—Alexi was on one of those two ships. The Coquette had last been seen off Cape Coast in West Africa, where the British had their naval headquarters. It was unlikely a disaster had overtaken him since then. But most of all, every nerve ending in her body told her that he was racing for home against one of his rivals. So, after all of these years, there would finally be a reunion.

And now, everyone at her table was discussing who the second captain could possibly be.

The anger, so carefully contained, simmered. The hurt, long buried, stabbed through her. She kept a perfect smile on her face. How could he have done this to her?

“My packet said the ship was not identifiable,” Carew announced.

“It might be one of Jardine’s; the house is always in the running,” Blair remarked drolly.

Elysse dared to look at him, hoping he hadn’t remarked her state of nervousness. But he was right and she said, “Their shouting was the loudest, I believe. Because of Jardine, Matheson and Co, our gunboats now cruise up the Pei-Kang River, threatening the Chinese authorities.”

Blair eyed her. “Are we changing the subject?” He mused, as if to himself.

And now, she knew she flushed. And she suddenly couldn’t wait for the evening to end—she needed at least one very excessive brandy. Alexi would be home by the morrow.

“Jardine’s got a very young, very shrewd captain in that John Littleton,” Carew remarked. “And they have built several ships just for the trade.”

Elysse breathed hard and stood up. “Are the gentlemen ready for their cigars and brandies? I know we ladies are eager for the best port in this house.”

“I’ll wager on de Warenne,” Lord Worth said, standing. His wife gave him an angry look. “I know the man, and he is almost invincible.”

“I’ll take the wager,” Carew said. “Odds and all, Captain de Warenne cannot be first into town three years in a row!”

“Fred,” his wife huffed. But her eyes glittered. “If you are going to await the ships, then Felicia and I are going with you.”

“Personally, I like a longshot,” Blair said, standing. “So I would like to make a wager, as well—a gentleman’s wager, of course. I’ll bet on Alexi de Warenne. And who will you gamble on, Mrs. de Warenne?”

She somehow smiled. “I never gamble, sir, but if I did, I would be loyal to my husband.”

“Of course. You must be thrilled that he will be home tomorrow.”

She kept smiling. “Of course I am thrilled.” Thrilled was the one thing she was not.

“Are we going to the docks to watch the ships come in?” Lady Worth asked her husband. She was as thin as he was portly, as pale as he was flushed.

He smiled and took her hand, fondly patting it. “I wouldn’t miss it for the world!” He turned to Elysse. “And surely, you will join us in the morning, will you not?”

Elysse was so surprised she almost gaped.

Blair ambled around the table to her side. “I will gladly escort you to St. Katherine’s myself,” he murmured.

She started. An entire group of her friends were going to St. Katherine’s docks to watch the two ships come in. Her heart was racing so swiftly now that she felt light headed. Of course she had no intention of going. She hadn’t seen Alexi in six years. He had very obviously been assiduously avoiding crossing paths with her. Clearly, he did not wish to see her, ever again. Clearly, he had no interest in their marriage. A public reunion was far too dangerous—the pretense she had lived with since their marriage could be exposed.

Blair touched her elbow, a soft caress. She shuddered, meeting his gaze. “You seem a bit…distraught,” he said.

“I am hardly distraught.” She was amazed at how competent she sounded. And she was now adept at maintaining a perfect façade, so she was determined to continue doing so. “I am eager for my husband to win this race—and command the best prices for our tea.”

“Well, depending on the winds, and you would know this better than me, they should arrive in town around mid day tomorrow. I’ll pick you up at half past ten.”” He smiled.

And Elysse realized that there was no possible way she could refuse to go to the docks to watch her errant husband return from China.

Eighteen of her twenty-three guests had congregated at the docks that morning, amongst a much larger crowd, numbering perhaps four or five hundred Londoners. Word of the clippers’ arrival had spread the day before, as it always did. The arrival of the first great ships of the season was both business and pleasure, as well as stunning news. Foremost amongst the crowd were the various brokers who would inspect the tea the moment it arrived, before the ships were even unloaded, sending samples onto their consigners before brokering their deals. Elysse had heard that both average men and women, as well as ladies and gentlemen, would turn out to await the great tea ships, but she hadn’t realized how excited the spectators would be, or how festive the occasion. Even children had come to await the great ships, and while most of them were street urchins, they were shrieking and running about madly.

It felt unbelievable. She hadn’t slept a wink all night—and two and half very large brandies, taken after all of her guests had left, hadn’t helped.

And she hadn’t even considered pleading a migraine. Blair would instantly see through such a sham.

She had dressed with great care in pale blue and aquamarines. She held an ivory striped parasol to shield her complexion from the sun.  She intended to look her very best. Blair had picked her up exactly at the specified time, and it had taken forty-five minutes to drive to the docks. They had chatted about the previous evening and the weather during the carriage ride.  It had been terribly difficult to maintain her façade of composure, while pretending to be looking forward to the reunion with her husband.

Years ago, when she had realized that Alexi meant to abandon her, and that they would not have a real marriage, she had somehow managed to bury the hurt and the anger. But now, the hurt simmered, feeling very much like an open wound, and she was so aware of it. But there was also so much anger.

She did not have a real marriage—it was a marriage in name only. And she had never expected that. She had never anticipated these past six years—she had never imagined that every day of her life she would be living a lie. For that, she would never forgive him.