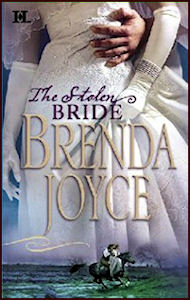 Sean O’Neill was once everything to Eleanor de Warenne—but since he disappeared from his ancestral home, there has been no word, and even Eleanor has abandoned hope, promising her hand to another. Then, just days before her wedding, Sean reappears… but the boy who was once her protector is now a stranger, hardened by prison and on the run.

A Traitor to the Crown

Weary and haunted, Sean is shocked to find that little Elle has become the beautiful, desirable Eleanor. Though he refuses to endanger her by pressing his claim, his resolve to stay away is sorely tested by the determination of a woman who will not be forsaken again. And when, in a moment’s passion, Sean steals another man’s bride, it is Eleanor who has the power to steal his heart…

Betrothed to a man of honor, her heart belongs to a traitor…

“Sean, damaged from his years in isolation, is a strong and mysterious lead, and Eleanor is more than his match; Joyce’s characters carry considerable emotional weight, and her fast-paced story keeps the pages turning.”
—Publishers Weekly

“Rejoin the de Warennes as Joyce displays her gift for crafting love stories for the heart and mind. She’s taken a flawed hero—quite the opposite of her usual alpha male—to present a story that reminds us of what it is like to fight for love. This is a powerfully executed romance overflowing with the strength of prose, high degree of sensuality and emotional intensity we expect from Joyce. A “keeper” for sure.”
—RT Bookreviews

“Historical lovers who enjoy a book that packs an emotional punch, this is the book for you….Brenda Joyce pens another winner in her de Warenne Dynasty series.”
—Historical Romance Writers

“The Stolen Bride is classic Brenda Joyce back in her element of strong tortured heroes, and heroines brave enough to rise against the odds.”
—The Mystic Castle

“No other writer can bring a story to life the way Ms. Joyce does”
—The Romance Reader Connection

Sean leapt up the terrace steps. The terrace was deserted and unlit, and even before he crossed it, he could see in the house where a gathering of some sort was in progress. He rushed to one of the huge windows and stared into the dining room.

The man who had taken him after the murder of his own father, who had raised him as his son, who had fed him and clothed him, who had taught him nobility and honor, who had loved him as if he were his natural born son, was standing at the head of the table. Sean clung to the stone wall of the house, his knees oddly useless.

And then he saw his brother.

Devlin stood, a tall, powerfully built leonine man, smiling, his beautiful wife at his side. He had rebuilt Askeaton for Devlin, and he would do it all over again in an instant if he had to—just as he would give his life for his older brother, too. And in not being able to go to him, it hurt looking at him now.

He swallowed hard. His beautiful wife, Virginia, seemed very happy and he was fiercely glad for her and for them. She had saved his brother’s soul years ago and for that, he would always love her.

His stepbrothers were also rising to their feet and he could vaguely hear them speaking. The mood was festive, warm, light.

And it was almost impossible not to recall every moment spent in that room with his father, his brothers, his mother and Elle. Like the surging tides of the Irish Sea, moments and feelings swept through him, over him, demanding attention, inspection, remembrance. He fought his recollection of an early Christmas morning, of a dark, wintry afternoon, of pleasant evenings in front of the fire, of family, male camaraderie and brandy. He began to sweat and he head to shake himself hard to free himself from the past.

Why was he doing this? Reminding himself of the life he had left behind was not going to help him elude the British and flee the country. But he did intend to turn back around in a few minutes; he would steal a fresh mount from the stables and return to Cork. He would be there before dawn, and when his ship set sail from Cobh he would be on it.

But he wouldn’t leave just yet; he would leave in another moment.

He was doing this because Elle was getting married, he reminded himself.

Sean pressed his face to the cold glass anyway, helpless not to lurk, watching Tyrell clasp Devlin’s shoulder. The two men were laughing about something as they followed the other men from the room. And it became impossible to deny the yearning to go inside and become part of that family one more time. He wanted it so badly he could taste it. But he made no move to do so. He was wanted for treason and he had no intention of bringing his the earl and his brother and stepbrothers down with him.

The woman were rising now and preparing to leave. The only woman he recognized was Devlin’s wife, Virginia, and Tyrell had his arm around a lady with titan hair. The rest of the departing crowd was meaningless to him, except for his mother, the countess. She was smiling graciously as she led the ladies from the room. She remained as graceful and elegant as ever, but he saw that she seemed older. He didn’t fool himself—his disappearance must have distressed her to no end.

Then Sean realized that one woman had walked away with Rex. And his gaze slammed back to her—and his heart stopped.

For one instant, he was paralysed, because she had changed—but he would know her anywhere. And there was so much relief, so huge and consuming that he almost collapsed against the window. Elle.

He stared. Nothing was left of the gawky, intrepid child—but then, if he dared to recall his last night at home, the young blossoming woman he had left four years ago had been anything but childlike. And he hadn’t really forgotten how tall she was, but he had forgotten that the planes and angles of her face, like the planes and angles of her body, had finally vanished. She had become so lush and voluptuous. The gawky child had become a beautiful woman, capable of stunning a man senseless.

And watching her smile and charm his brother, he became oddly confused—and he felt his world turn upside down.

Sean panicked. He did not want this now. What was he doing, anyway? He had expected to return to a slender young woman who had never been kissed, a young woman whom he saw only as a friend and sister. Now she laughed at Rex, her smile dazzling, and he could almost hear her then.

Have I ever told you that you are my favorite brother?

Words Elle had said to every one of his stepbrothers and to Devlin, to everyone but him.

And realization struck him with the force of lightening, causing him to stagger. He was staring at Elle with need and hunger.

It was impossible, he thought, stunned, incredulous and aghast. He could not desire the woman he had considered a sister for most of his life. His body would respond as it was doing to any beautiful female, due to years of celibacy, his only relief inflicted by his own hand.

She was walking away from Rex and smiling at a blond gentleman, looping her arm in his. He briefly looked at her escort, realizing that he was her intended, Sinclair. And he was handsome and privileged, with the bearing of a born aristocrat. Sean despised him on sight.

Sean realized he was shaking and desperate and he was furious with her, with Sinclair, with himself. Of course Elle had grown up. He had every right to be surprised by the beauty she had become; he had no right to any other feelings. And where the hell was she going with Sinclair, anyway? He returned to the window and realized that the dining room was now empty.

And the moment he heard the terrace door open he also heard her laughter, and while the sound was familiar, it was also strange and new. Her laughter had changed. It had become sultry; it was seductive.

He pressed his back into the wall, waiting for them to come into view and as he waited, he realized that his loins were stiff and full. But he barely had time to absorb that terrible fact when they appeared, strolling to the balustrade. They were so engrossed in one another that he did not think they would notice him in the shadows against the house. She moved differently not, too. Her stride was long but there was a sensuous quality to the sway of her hips—a quality he instantly hated. She moved like a woman who knew she was being appreciated and admired, pursued and watched.

“Have I told you how lovely you are tonight?” Sinclair asked, taking both of her hands in his.

“I don’t think so,” Eleanor said, a smile in her voice. “But if you did, you can always tell me again.”

She was flirting! Since when had Elle learned to flirt?

“You are so beautiful.” Sinclair said thickly, and Sean hated the rough tone of his voice. They should not be out on the terrace alone, at night, unchaperoned. Where the hell was everyone, anyway? She had four brothers to chaperone her. Why wasn’t someone doing precisely that?

“And you sir, are far to gallant and far too charming,” Elle returned softly. “I am so fortunate to be marrying such a man?”

“A man cannot possibly be to charming or too gallant, not where you are concerned,” Sinclair whispered.

Did he know that his ladylove was a hellion? Or had Elle given up her wild gallops, her fist fighting, her swear words? Did she still hunt and fish? Or was she now a debutant and a flirt?

“I am pleased that you are so charming,” Elle whispered back. “I find you very charming indeed, even if your eyes are blue.”

Sean had not a clue as to what that meant, and apparently, neither did Sinclair.

There was strained silence then.

Sean felt like smashing the wall. And maybe he would—because he knew that Sinclair was preparing to kiss her.

“I though you would wait forever to ask,” she laughed.

His breeches had become constrictive—hurting him. He leaned against the stone wall, furious and paralyzed, panting hard. But he refused to look away and he could not comprehend the sensual woman in the other man’s arms—Elle, who was kissing him and making small, breathy sounds of pleasure and delight. At least Sinclair was a rotten lover—either that, or was he holding his passion in check. Because Elle’s soft cries were hardly the earth shattering ones of a woman about to find ecstasy. He jerked on his fly. She might be a woman now, a very desirable woman, but they had grown up together and he had no right to the lust in his loins.