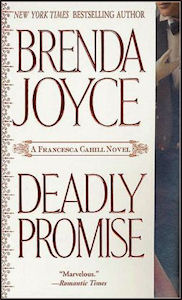 It is March of 1902, and Francesca Cahill—Fifth Avenue heiress, undaunted political activist and intrepid amateur sleuth—has just learned of a grave new danger haunting the streets of New York. A beautiful teenage girl named Emily O’Hare is missing and Francesca fears that the girl has been abducted. Only one person can help her learn the child’s fate—but Police Commissioner Rick Bragg may not want to get involved because Francesca has just stunned Rick by accepting a proposal of marriage…from none other than his own rival.

Francesca still questions her decision to marry the powerful and notorious Calder Hart. But Rick Bragg is wed to another…and his dazzling wife has just returned after four years abroad to reclaim their marriage. Francesca remains torn between the two very different men-but she desperately tries to set aside the affairs of her heart when she discovers that Emily isn’t the first girl to vanish in recent weeks. And when Francesca discovers a trail of deception and lies, when someone very close to her investigation is murdered, Francesca realizes that the evil force behind the girls’ abductions may try to find a way to silence her too—if she dares to uncover the truth…

With her beloved Francesca Cahill novels, New York Times bestselling author Brenda Joyce has created a truly memorable series that brings turn-of-the-century New York City vividly to life. Readers enter a world where danger, passion and intrigue mingle on every gas-lit street—and where promises come at a most frightening price.

Listen to a audio clip from Deadly Promise, on sale March 25, 2014 from Audible, an Amazon company.

“Francesca Cahill! You disappeared for an entire month! And I am dying to know why!” Connie Cahill, otherwise known as Lady Montrose, cried.

Francesca cringed, but only inwardly, as she faced her always fashionably elegant older sister. The entire city thought of her as a hero. But that wasn’t true. She was, in fact, a coward, never mind the many crimes she had solved, the many dangerous and murdering hooks and crooks she had single-handedly faced and apprehended. She was a coward, because only cowards ran away from the man they were supposed to marry. Of course, her disappearing act had undoubtedly ended her secret engagement anyway.

Connie faced her after closing the door to Francesca’s large and beautifully appointed bedroom—a room she had had no say in decorating, as the decor had been chosen by her mother Julia and her sister. Francesca hadn’t cared then, just as she did not care now. Décor—and fashion, shopping and teas—were hardly important to her. She forced a smile and hurried forward clad only in her corset and drawers, and embraced her sister. “It’s so nice to see you, too,” she whispered, but she meant it. Connie was not just her sister; she was also her very best friend.

“Do not think to dissemble with me,” Connie said, her hands on her slim hips. She was clad in a gorgeous dark blue evening gown, with sapphires around her throat and wrists, atop the white sateen gloves that ended at her elbows. “I know why you disappeared!” Her blue eyes flashed.

Francesca tensed. Connie could not know. Before leaving town to visit an old and ailing and very fictitious school chum, she had left a brief note, one that hardly explained anything, but did request that their engagement remain a private affair until she returned to New York City. Francesca hadn’t left a forwarding address, so she had no clue as to what her fiance’s reaction to her note and her vanishing act had been. “You do?”

Connie sighed then. “There is no Elizabeth Jane Seymour, Fran. I would recall a best friend by that name! You chose to leave the city because you could no longer handle the little predicament you have found yourself to be in.” Connie, who was a platinum blond generally considered to be a great beauty, eyed Francesca with some smug satisfaction now.

Francesca sighed in return. She hated deceiving anyone, much less her sister. But leaving the city had been a terrible impulse—she had given into panic and terror. Marriage had never been a part of her agenda. Her agenda had been to become a journalist, one exposing the world’s ills to society, so those with the means could engender badly needed reforms and humanitarian aid. That agenda had included a higher education at a renowned women’s institution, Barnard College. However, her agenda—and her life—had begun to unravel some time ago—last January, to be exact. She had fallen in love while solving a terrible crime, and nothing had been—or would ever be—the same again.

Perhaps Connie hadn’t learned about her engagement—which meant that neither had her mother. And it was Julia Van Wyck Cahill’s dearest desire to see Francesca suitably wed—immediately—before she solved another crime and garnered another headline. Julia was a very powerful woman who always got her way. “Yes, I found the heat too much to bear,” she said warily.

Connie met her gaze. “The heat? You sound like that little hoodlum you are so fond of. Joel Kennedy.”

“I suppose his ways are rubbing off on me,” Francesca murmured, as she had come to rely on the eleven year old heavily in her sleuthing. He knew the city’s worst wards intimately. He was her guide, and more.

“Oh, Fran. They will both be at the Wainscot ball tonight.” Connie’s gaze moved to the bed behind Francesca, where a vivid and dark red ball gown lay. “Mama said you would attend. And I see you are wearing the red.” A knowing look came to her eyes and she smiled.

“It’s not what you think,” Francesca cried. Both Rick Bragg, the city’s police commissioner, and his notorious and wealthy half-brother, Calder Hart, would be at the Wainscot ball tonight. Out of the frying pan and into the fire, she thought. Oh, God, what should she do? Was she doing the right thing? And how could one marry a man one didn’t love—even if that man’s mere look could enflame her entire body? And could two half brothers be more unalike—and more bitterly jealous of one another? If only they weren’t such avowed rivals.

“Then tell me what to think,” Connie said, moving to Francesca and placing her arm around her. Both sisters were considered to be as identical as twins, although Francesca’s hair was the color of rich honey, and her skin was tinged with tones of peach and gold. Francesca knew that was not true. Her sister was beautiful, while she, Francesca, was on the ordinary side of pretty. Connie always stood out in a crowd, but she had been a wall flower (and a bookworm) for most of her life.

“I have been so worried about you,” Connie said earnestly, sitting down on the bed by the infamous red gown.

Francesca sat down besides her and they clasped hands. “I have been worried about me, too,” she said softly.

“Oh, Fran, Didn’t a month away clear your head?”

“You are still torn between Bragg and Hart?” Connie wasn’t smiling now. She was concerned.

Francesca nodded, wishing she knew what to do—then slowly pulled a chain out of her bodice. On the end dangled a huge pear-shaped diamond ring, one worth quite the fortune.

Connie blinked and met Fran’s gaze. “You are engaged?”

“We were. Briefly. Secretly,” she added. “I have no idea if we still are—and if we aren’t, why, then it is for the best. Marriage is not for me and we both know it.”

Connie shot to her feet. “What nonsense is this? You fool! To run away and sabotage the best thing that could happen to you! I pray you are wrong and that you haven’t single-handedly destroyed this opportunity, Fran.”

Francesca swallowed. A part of her desperately wished that she had not run away—and that she had not sabotaged her secret engagement, too. “Can I ride over to the ball with you and Neil? I am really not in the mood for Mama’s lectures tonight.”

Connie nodded. “Of course.” But she was staring intently now. “Still, you have been wearing his ring around your neck. Did you take it off even once?” She did not wait for Francesca to answer. “I daresay you did not. And you are wearing the dress. The dress he likes. I do think I am underestimating you.”

“I am a fool, Connie, to think I am special, because every single woman he has had has thought the exact same thing,” Francesca cried. And it was the truth.

Connie gripped her shoulders. “But you are special! Good God, you are the bravest and most clever—and most stubborn—woman I know. You have spent your entire life since you were a child of six defending the rights of the poor and the helpless, and of fighting for those rights! You attend college, Fran, college, how many women do that? And need I add that you have become the city’s most famous sleuth in the past three months? You have made the news, Fran. You have brought terrible criminals to justice.”

Francesca blinked. “Well, when you say it that way, I do seem rather eccentric.”

“No, not eccentric, original and brave and beautiful and special,” Connie cried.

Francesca hugged her hard. “You are the best sister a girl could ever have,” she whispered.

“I wish you could see yourself the way that the rest of the world does-the way that I do.”

Francesca smiled. “I had better dress. I am quite late.”

“Yes, you are late.” Connie smiled back as warmly. “Do you need help? Should I call Bette?”

“I’m fine,” Francesca said, turning to gather up the provocative red dress. But it was a lie. She wasn’t fine.