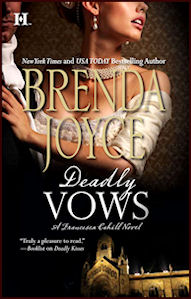 On the morning of her wedding to Calder Hart, amateur sleuth Francesca Cahill is lured away to a private viewing of the one thing that can destroy her whole family: a nude painting of her. Her desperate quest to find the indecent portrait and preserve her family’s reputation leads her into a dangerous thief’s trap with no way to escape until it’s too late. Her wedding is ruined—and so is the trust and love that Calder once felt for her.

Then the damning painting goes missing.

Scouring the sordid streets of Manhattan, Francesca is on the hunt for answers; who is the perverse sociopath responsible for stealing the scandalous portrait?  How can she regain her place in Calder’s heart?  And is their passionate love affair well and truly over?

Listen to a audio clip from Deadly Vows, on sale March 25, 2014 from Audible, an Amazon company.

“If you’re looking for a solid mystery series, with a healthy dose of romance, check out this series.”
—Romancing The Book

“With a fantastic cast of beloved characters from this series’ previous books and an equally terrific cast of suspects, who have caused trouble in the past, Brenda Joyce pens an absolutely thrilling and complex conclusive to her Deadly series in DEADLY VOWS. In fact, readers will be on the edge of their seats not only to discover who stole the portrait but also to see who Francesca ends up marrying! Well done, Ms. Joyce – WELL DONE INDEED!”
—Readers Groups Liaison

“It’s wonderful to have Joyce’s intrepid sleuth Francesca Cahill back in another fast-paced mystery. Deadly fans, who know the series is as much soap opera as a marvelous mystery/romance, will be more than satisfied to uncover another chapter in the Cahill/Hart/Bragg saga. Joyce never disappoints, being sure to add every element of a chilling mystery seamless into a strong love story set against a colorful backdrop.“
—RT Bookreviews

Calder Hart stared out of the window of the Fifth Avenue Presbyterian Church’s second floor lounge, smiling ever so slightly, and feeling very pleased. He was already in his tuxedo, although he had yet to don his tie. Fifth Avenue was so oddly deserted. Everyone who was anyone had left town for the summer, except, of course, for those at the uppermost crust of New York society who lived in awe–or fear–of Julia Van Wyck Cahill. Construction had begun across the street on what would eventually be the St Regis Hotel. Even the crane there could not spoil the view.

The avenue was terribly attractive this way, in such a state of splendid desolation, with only a single carriage and two black hansoms traversing its paved streets, stately mansions, elegant townhomes, exclusive shops and clubs lining the thoroughfare. Only three coaches were parked outside of the church, directly below him—it was far too early for guests to begin to arrive. He glanced at a tall grandfather clock in one corner of the dressing room. It was a few minutes past 3 pm. His gaze wandered back outside. Surely he wasn’t looking for his bride—he was not superstitious, but he had no wish to see her before the wedding, just in case. He smiled to himself. He had little doubt that Francesca was already in the church, with her sister and mother frantically applying the finishing touches to her toilette, as if she could possibly be made any more beautiful.

A few months ago, if someone had told him he would be at a church, not to attend a wedding, but as the groom, he would have been very amused—and he would have considered that person an utter, absolute fool. Yet there he was, with a racing heart, and a touch of nerves, nonetheless.

“Hey, Calder,” Rourke Bragg said, laughter in his quiet tone. “Are you planning a mad dash for the exits yet?”

He took one last look at the quiet avenue. Two roundsmen in blue serge, carrying billysticks, were standing on the street corner, chatting. Hart suspected they would soon be directing traffic.

He slowly turned to face the young man who had spoken. Rourke took after his father, Rathe Bragg, in that he was tall and broad shouldered, with golden hair, amber eyes, and a sun-kissed, almost swarthy, complexion. He also had Rathe’s inherently sunny—and optimistic—nature. Currently in medical school, he was actually Rick’s half brother, but having been taken in by the Bragg family when their mother had died at the age of nine, Hart considered him a relation, if not a sibling of sorts.

He also happened to like Rourke, who was devoted to his medical profession, and had not one hypocritical bone in his body.

Speaking of hypocrites, Rick Bragg had yet to arrive. And he had only spent a half an hour last night with them at the private room they had taken in the Sherry-Netherland to celebrate the last of his bachelor days. Hart smiled grimly. He rarely bested his perfect brother. He had surely bested him now.

He would never forget that once, months ago, Rick had been smitten with his bride. But Francesca was marrying him.

The satisfaction welled. It was savage. And there was no point in denying it—he preferred basking in it now.

Hart slowly smiled. “If you are asking me if I have doubts, the answer is that I have none.”

Everyone in the room turned to look at him. The only male in the wedding party who was not present was the father of the bride. Andrew Cahill was downstairs, and Hart knew he was eager to meet every single guest personally, and was pacing in the front hall. “It must be love,” Hugh Bragg snickered. He’d arrived from Texas two days earlier.

Hart was adept at ignoring the conversation he wished to ignore, and he said, unperturbed, “I am marrying the most interesting woman on this planet. Need I say more?” And he smiled.

Francesca’s brother, Evan Cahill, smiled, too. “Even the mighty fall,” he murmured.

“Like I said,” Hugh laughed, reaching for a flute of champagne.

He was only fifteen, and his father adroitly removed the flute before he could take a sip. Scowling, Hugh accepted a root beer from Alfred, instead.

And Hart had meant his every word. He had no doubts. He had realized, within days of meeting Francesca—and he had first glimpsed her on January 25th– that she was the most extraordinary of women. She was as brave as she was beautiful, her intellect was astounding, and she had more ambition than most men he knew. She was all that was good, pure and honest in the world, and he worried, because she was so trusting. And he had never known anyone more selfless, or more generous. She had shown him, time and again, that she could not turn her back on anyone in need.

And she was also independent. Most men would hate her refusal to be subservient and obedient; he admired her willful, libertarian nature.

Of course, she was reckless and impulsive, and no one had less common sense. But now that he knew how easily she leapt in front of runaway trains, he would be there to restrain her from her poor judgment. She had already caused him to grow a gray hair or two—and they had only known one another for five months.

He had first glimpsed her in Rick’s office on January 25, but he had first spoken to her at an outrageous party on the rooftop of Madison Square Garden on January 31st.  And while he hadn’t thought about it, not even once, on Feb 23 he had looked at her, realizing how much her friendship had come to mean to him, his heart lurching oddly, and he had known that she was the one woman in this world who would never bore him. In fact, she had entirely changed his world, in a handful of days, and while he thought the human aspiration to acquire happiness incredibly trite, she had warmed his entire life. The decision instantly made, he had abruptly informed her that he intended to take her to wife. Needless to say, Francesca had been in shock.

She had accepted his suit five days later.

It was almost impossible to believe that they had come this far and that this was their wedding day. But he wanted to marry Francesca Cahill, and he always got what he wanted. No one acquired the wealth and assets that he had, coming from such stark and impoverished beginnings, without sheer will and unholy ambition.

He was even eager for their wedding night, although he tried to feign indifference, and even nonchalance. He was so used to casually seducing the beautiful women that crossed his path that it had become a game of sorts, and he hadn’t wanted to treat her like the others. She still didn’t understand. But she was nothing like the others. Francesca he intended to treat with respect. He had decided that he would not take her innocence until they had said their vows. Of course he was looking forward to the upcoming evening.

But then, he had a moment of hesitation—and it was almost a frisson of fear.

She thought him noble. And that was her most astounding feature–her unshakable faith in him. She simply did not understand that he was motivated by self-interest–always. If he were noble, he’d allow her to find someone worthy of her—someone like Rick. But he would never do such a thing. She was his first and only friend, his best friend. Of course he must have her entirely for himself.

She refused to see him as he truly was, and sometimes, that terrified him.