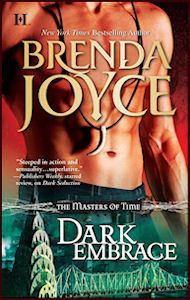 A Highland warrior sworn to protect Innocence throughout the Ages…

Aidan, the Wolf of Awe, has abandoned the Brotherhood and forsaken his vows. Feared by all and trusted by none, he hunts alone, seeking vengeance against the evil that destroyed his son. He has not saved an Innocent in sixty-six years–until he hears Brianna Rose’s scream of terror across centuries, and leaps to modern-day Manhattan to rescue her…

Her Seduction. His Salvation.

Brie spends her time fighting evil from the safety of her laptop—and fantasizing about the medieval Highlander she met just once. She is also a gifted empath. Still, her life is pretty ordinary—until she awakens one night consumed with Aidan’s pain and rage—which she is feeling across centuries! And when Aidan suddenly appears in the city and takes her hostage, Brie cannot believe how dark and dangerous he has become. She knows she should be afraid, but instead, she will fight across time for his redemption… and his love.

Every Rose woman has her destiny.

“Brenda Joyce has created a tale that is full to overflowing with emotion. Passionate, heartbreaking, hopeful, and entertaining, DARK EMBRACE is a novel you do not want to miss. I recommend it highly.”
—Romance Reviews Today

“Known for her intensity of emotion and superlative storytelling, Joyce draws you into a new Masters of Time novel that will blow you away with it’s unforgettable alpha hero and a willful heroine who feels his pain across the centuries. While enabling the hero to redeem his honor and self respect — and at the same time restoring the communication and love between a father and son — Joyce raises the bar.”
—RT Bookreviews

“DARK EMBRACE will not disappoint readers and fans of the series; Brenda Joyce takes Aidan to the dark side with a captivating inner battle of good vs. evil.”
—The Mystic Castle

“In the third book of her Masters of Time series, Brenda Joyce explores the darker side of human nature.”
—Readertoreader.com

HE WAS A MAN, NOT A WOLF, and he was bleeding from his gunshot wounds. His blue eyes blazed with rage and fury…and he was utterly naked.

Brie cried out, pressing her back harder into her door. This man bore no resemblance to the Master she’d met last year. She couldn’t breathe, choking on her fear. She looked from his beautiful, furious and ravaged face to his bloody body and then at the gold chain he wore, with the fang hanging on it. She inhaled. He was all hard, rippling muscle and his entire body throbbed with tension.

His blue eyes were livid. “Never summon me again.”

His enveloped her. It was terrifying, for there was so much hatred in it. Brie shuddered. The power of his hatred made her begin to feel sick. She tried to shake her head. She hadn’t summoned him!

He was the Wolf of Awe.

What happened to him?

The wolf wanted blood and death. Brie felt the blood-lust. And she had seen the evil.
She could barely think. “ You’ve been shot.” She realized she was whispering. “Let me help you…Aidan.”

He snarled at her. “Come closer an’ see how ye can really help me, Brianna.”

She exhaled harshly and didn’t move, uncertain that he wouldn’t turn into that wolf and rip her to death. But he had saved her from the gang. If he was going to hurt her wouldn’t he have done so already?

Her temples pounding with the pain of taking in so much of his rage and hatred, feeling faint, she met his glittering blue gaze. His hard stare was unwavering. It was cold, menacing. How could a man change so much in a single year?

She was terrified of him, but she was supposed to help him, wasn’t she? “You’re bleeding,” she whispered. “You could bleed to death.”

He barked at her, a dark, bitter laugh. “I willna die, not yet.”

She tried to fell past the hatred and anger, the lust for more blood, but if he was in pain, it eluded her. If he had been weakened, she couldn’t feel it. He was probably too angry and filled with adrenaline just then.

She pushed the fear aside. She could not let him die. Her heart exploding, she turned and opened the linen closet, not far from the kitchen. She took several towels in out and faced him. His gaze moved from the towels in her hands to her face.

The distance of a small kitchenette separated them. She started forward slowly, in case he tried to seize her—or worse, turned into the Wolf and leaped at her.

She faltered by the kitchen counter. “Here.” She held out the largest towel.

He looked even angrier.

Brie tossed it at him.

“I need power,” he said dangerously.

She thought he meant to catch it. Instead, he batted it away with one hand. Her gaze dropped of its own accord and she knew she flushed. “You need clothes—and medical attention,” she whispered, dragging her eyes upward.

“I need power,” he said dangerously.

Demons lusted for power. All evil did. Brie felt tears of fear and despair well. She somehow shook her head. “No” What happened to him? That Wolf had been evil. That Wolf had destroyed those teenagers. He was shrouded in darkness; there was no white light. How could this be her Aidan?

He suddenly turned and picked up the towel, his every movement filled with raw fury. He wrapped it around his waist. When he looked at her with his blazing eyes, he said, “They were lost.”

She trembled. He had read her thoughts. “You don’t know that their soul couldn’t be reclaimed.”

She snarled at her.

“Are they all dead?”

“Every last one,” he said savagely, as if triumphant.

She wiped at her tears.

“Ye cry for the deamhan boys?”

It was a moment before he spoke. “I hardly saved ye, Brianna,” he said, so softly that her heart skipped and then thundered.

Brie found her gaze fixed on his. IN that instant her tension changed. Desire charged through her body in response to his blatantly seductive tone.

She became still, her body tight now, quivering, while fear surged. She began shaking her head, refusing to believe him capable of hurting her.

She prayed that he had not fallen so far into black evil that he could do such a thing.
But dear God, she was standing face-to-face with the man she had just spent the past year dreaming of. In the circumstances her body should not be reacting to his very male and obviously virile presence, but it was.

Brie wet her lips and backed up.

His lust escalated dangerously, changing. It overshadowed the anger; the hatred. The need to draw blood vanished. She began to feel dizzy, hollow and faint. Her heart was pounding so hard it hurt. His gaze was on her face and the tension that throbbed between them seemed so charged, Brie thought that air might blaze.

Brie closed her eyes. So much emotion was swirling in the room, she was becoming confused. She had to keep a grip on her mind. She had to fight her empathy. She couldn’t desire him now! He was simply too dangerous.

She fought for control. When she opened her eyes, he looked oddly satisfied—as if he senses her internal struggles. “Aidan, please sit down.” She swallowed, knowing she sounded like Tabby with her first-graders. “I can stop the bleeding until the medics get here.” Keeping up the pretence, she nodded at the sofa.

He laughed at her. “Dinna speak as if I’m a small boy. Three bullets can’t kill the son of deamhan.”

She went rigid. He could not be the son of a demon. Was this a bad, bad joke?
“Aye,” he said, growling. “The greatest deamhan to ever walk Alba spawned me.”
Brie began shaking her head. More tears rose. How could this be happening? “You’re a Master!”

“Damn the gods!” he roared.

She cringed, shocked. “They’ll hear you!”

Brie did not move, searching his furious gaze. He hated the gods. She trembled, afraid for him.

His lust for power and sex made her reel. But she was also sickened, in her heart, as well as her stomach, because the rage and hatred, the lust, the frenzy of it all, were too much for her to bear. “What happened to you?”

“Come her,” he said softly.

She tensed, instantly aware of what he intended.

She wanted nothing more. And suddenly she wasn’t sure why she was hesitating.