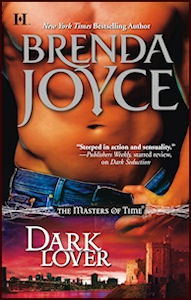 Ian MacLean’s arrogance hides a terrible secret for decades he was held prisoner by demons. Not a day goes by that he isn’t tormented by his darkest fears of powerlessness. Now he is about to sell to the highest bidder a page he’s stolen from the Book of Power if one women doesn’t stop him.

A woman with enough destiny for them both

Slayer Samantha Rose’s latest mission is to recover the stolen page—and get payback from the only man who’s ever rejected her.  What she hasn’t counted on is the raging attraction between them—or her growing realization of what Maclean has survived.  As the powers of the evil from his past gather, Sam will do anything to help him—even if it means following him into time and facing his worst nightmares with him…

Highland Warriors, sworn to protect innocence through the ages…

DARK LOVER is awesome! I have thoroughly enjoyed this series and this instalment has been my favorite so far. Brenda Joyce just has a way with those Highland men. Ian’s character is complex and strong and yet he lets the past rule him. But Sam is just as complex and the answer to the puzzle of Ian. I can’t wait to see what Ms. Joyce has planned for us next.”
—Romance Readers Connection

“The latest Masters of Time volume continues Joyce’s tradition of alpha males being saved from their emotional darkness by heroines from a different time. In this enthralling story the heroine is an alpha female, which adds incredible conflict to an already powerful romance.” —RT Bookreviews”

“Bravo to Brenda Joyce for penning DARK LOVER, which is time-travel romance at its finest! Not only is there a fabulous red-hot battle of the sexes plot but also a complex good vs. evil plot that revisits beloved past lovers and gives romance fans a new couple to love.”
—Rouse Romance Readers Group

It was late enough that no one was on the street as he went to the front door of the turn of the century building and keyed in the door code, Sam close behind him, due to the handcuffs. He’d left the lights on in the entry foyer, which had double ceilings. As he closed the door he glanced at her bleeding arm, and then at the torn dress. She seemed to be bleeding from the gash on her ribs and indifferent to it.

Sam was eying his furnishings, which were mostly antiques from previous centuries. She put her messenger bag on an Irish library table from the seventeenth century. Even the chandelier above them was from fifteenth century France. Only the rugs were new or fairly new. And above the front door were a pair of genuine sixteenth century swords. Interesting choice of décor for a modern playboy,  Sam said. Her gaze was sharp. Come to think of it, your mansion on Loch Awe is as old world.

I like old things,  he said. Yer bleedin all over my twenty-five thousand dollar rug.

Sorry. I’ll get you a new one in the twenty-second century when I’m rich and famous.

He tugged on the cuff and she came forward, tripping in the broken sandals. He caught her by her hips, which were hard and muscular beneath his hands. He was already in overdrive. But his sexual tension soared. Sex would push the last of his memories away. Why wait? Do ye want to tend the wound?  he asked softly.

Not if it means letting you out of my sight. She seized his wrists but didn’t step back. What, no butler to wait on us? 

Gerard is sleeping at this hour. He pulled her closer, and her eyes calmly met his as she came into contact with his huge arousal. Afraid to be alone with me? 

She took a breath. I’m never afraid. Hey, I have a great idea. Call Gerard and have him arrange some evening entertainment for you…before you explode.

He grinned. Will ye watch? 

He thought about performing for her again. But that wasn’t what he wanted or what his body was screaming for. He tightened his grasp on her, their gazes locked, wedging her against a hall table.

Don’t think it,  she murmured.

I canna thinks of anything else. Especially with yer body shackled to minivan quiverin so hotly.

You can’t think of anything else whether we’re shackled together or not.

He decided not to answer. And he slid his hand down her hip.

She went still, inhaling. Make a pass—at your own risk.

He smiled. It was hard to restrain himself. He wanted to put his hand between her thighs; he also wanted to turn her around and bend her over the table and just do it, finally. She knew. And she wouldn’t object very much. Her words were sharp and caustic, but her tone was thick. And those violet-blue eyes were smoldering.

Ye weren’t afraid tonight. He touched the bloody, crusting tatters of the jersey dress, her left breast heavy and brushing his hand, and felt her flinch.

I’m a Slayer, Maclean. She was wry.

Are ye ever afraid? 

She stared into his eyes. Not for myself.

And admiration swept through him. Her left breast was heavy on the back of his hand. He pressed upwards and felt her inhale. And the gasp had nothing to do with pain from the gash on her ribs. How much does it hurt?  he whispered.

What are you high testosterone version of Florence Nightingale? 

He took her bodice in his hands and snapped it down below her breasts.

She stiffened, tightening her hold on his wrists.

His mouth became dry instantly. Very slowly, he looked up into her eyes. Turn around, Sam.

She looked down at what was between them. As good as that looks and feels no, thanks.

He reluctantly looked past her bare heaving breasts, and at the open, bleeding knife wound. She wasn’t immortal. She should take care of the cut. He looked up. But I can pleasure ye more than yeve ever been pleasured.

Ouch,  he said, but he grinned. He was going to enjoy the hunt, more than head had in a long time, if ever. His hands were positively itching, and he finally let go of her bodice. He knew head pay, but he cupped her bare breasts anyway.

Her spike heel bored into his instep. And he released her, cursing.

Hands off, she warned.  And she jerked the dress up.

Mayhap ye should have thought twice about handcuffin us together.

If you didn’t have the power to leap, I’d handcuff you to the wall,  she snapped. No, to the bedbug alone. I’ll bet that would torture you.

He tensed, but hid it. And the images flashed of the little boy, hiding under the bed. He inhaled and forced a smile. Ye ken well have to sleep together? Bathe together? Use the bathroom together? 

I can handle it, MacLean. So let’s go. It’s almost one thirty. I need to clean up and then I’m putting you to bed.

He stared at her. I’m no gentleman.

No, kidding. But you’re not a rapist, either.

He inhaled.  He hid in the closet as they searched for him, beneath coats and jackets, barely able to breathe. The fear was cloying, and he’d only been imprisoned weeks ago it was all new and terrifying. Still, he knew what they wanted, what they would do. Tears streamed. He prayed for his father. And then the door was torn open and off its hinges, and the monk stood there, red eyes glowing. Ian stopped breathing, paralyzed. And the monk laughed, reaching down for him