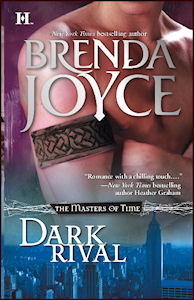 A golden man, he is called Black Royce—a battle-hardened soldier of the gods. His vows are his life—until he is sent to New York City to protect a Healer from those who would use her powers for themselves. The moment Royce sees beautiful, feisty Allie Monroe, he knows she will be his only weakness—and he is right.

Destiny is a dangerous thing…

Allie Monroe is more than an heiress. She is a Healer, willing to do anything to save victims of the evil that lurks in the city at night. But alone, she can do only so much—until destiny sends her the darkest Highlander of them all. Then evil strikes and Royce is destroyed before Allie’s eyes. Now Allie will do anything to save Royce—even if it means going back in time to a dark, dangerous world. Confronting their enemies could cost not only their lives, but their love—for all eternity.

“With Brenda Joyce there is NO limit to what she can tell and weave into her sexy novels.”
—Book Cove Reviews

Long Ago, somewhere in the Kingdom of the Picts

Today he would die. He did not care, even though he was but three and twenty. For he would not die alone.

He stood on the ridge amidst oak and pine, panting like a hunting hound, sweat pouring down his body. He had been hunting Kael for two endless weeks, ignoring all advice, all counsel and every warning. But Kael was within the fortress on the other side of the glen, atop the adjacent ridge. He did not have to see him to know. He felt his black power.

But he could not sense Brigdhe, his bride.

Pushing tendrils of gold hair from his face, he started down the ridge, his strides long, hard. His linen tunic stuck to his young, hard body, soaking wet, clinging there. His longsword bumped his thigh with every step. He left the security of the tree line, and saw men gathering on the wooden watchtowers, which were spaced evenly about the palisades. A horn blew. He smiled. Let them shout a warning!

He reached the barred doors of the fortified manor and did not hesitate. He was new to his powers. He had been summoned to Iona six months ago by his father’s friend, MacNeill. He hadn’t understood then what a summons by an abbot to a monastery had to do with him. But he had quickly learned that he hadn’t been summoned by a true abbot, and that there was far more than a monastery on the island.

He’d been aware for most of his life that he was stronger, more virile and more sexual than other men. His intellect was sharper, his sense of danger far more acute. And physically, he was at least a head taller than his friends.

And when he made his vows to old gods he hadn’t paid attention to until the choosing, swearing to protect Innocence through all time, suddenly his powers were released. He remained unsure of just how strong he was, but nothing would stop him now. He reached for the bolted doors, each one as tall as two men and as wide as a warhorse. He ripped them off their iron hinges.

Above him, on the towers, the men shouted in alarm.

Arrows rained down on him. One pierced his skin and stung. Another went deeper, embedding itself in his flesh. He ripped it out, feeling no pain.

He collected his mind and instinctively put his power around him like a shield, never breaking stride, heading for the largest of the buildings in the fort. The arrows fell uselessly around him now.

A dozen giants rushed him, carrying lances and leather shields. They were human, but evil possessed them.

The giants rushed him, throwing their spears all at once.

He found more power and thrust it boldly at his assailants; the giants fell as if pushed by huge winds, their spears flying backwards, past them.

He lunged up the steps and into the darkened hall.

But he saw only Brigdhe, lying naked on the rug before the fire, her long red-gold hair streaming about her slender body, her hands bound. He faltered.

She turned her head listlessly and looked at him. Her eyes widened—and then he saw the accusation on her face.

The blow took him by surprise, sending him flying backwards. He landed hard on his back by the door, but did not drop his sword. And as Kael’s sword descended, Brigdhe’s accusatory expression remained engraved on his mind, and with it, so much horror arose in his heart. Instead of parrying the blow, his own weapon yielded uselessly and Kael’s blade rent his shoulder, all the way through muscle and bone.

He forgot his bride. He rolled away as Kael blasted him with more energy, the second blow as stunning as the first. He was not used to men fighting this way. Pushed against the wall, he felt Kael’s sword coming, and this time, he struck upwards with his blade, blindly, by sheer instinct.

He was hurled backwards into the wall again. As he crashed into the wood as if thrown from cliff to the glen below, he gathered his wits. He had power now, and surely he could fight this way, too.

“A Bridghe,” he roared. And he struck at Kaal with all the power he had.

Kael was flung across the entire hall, landing on his back, not far from Brigdhe. He rushed after him, ignoring the burning pain in his shoulder. Kael rose and he thrust his blade savagely through his heart, the tip piercing out the other side of his back.

A human would have instantly died. Kael gasped—and then smiled.

He could not understand and did not care too. He pulled his sword free, took Kael by the neck and cruelly snapped it in two. The demon’s red eyes glowed another time—and then they were sightless.

Instantly, a pain arising in his shoulder, he ran to his wife.

She sat with her back to the wall, hugging her knees to her chest. His heart now breaking for her, he knelt, reaching for her, about to enclose her in his embrace. The pain in his shoulder suddenly screamed, making him dizzy.

Stunned, he jerked back, the floor becoming level once more. Somehow, he dropped his hands; somehow, he did not touch her. “T’is over now.  I’ll take ye far from here,” he soothed. But in his own heart, he was sick, frantic and ashamed of his failure to protect her.

He tensed, stunned, searching her eyes, but she wouldn’t look at him now. “I’m sorry, Brigdhe.”

“Sorry?” Her tone was scathing and hatred filled her eyes. “Get away from me. He did this to me because of ye. Stay away from me!”

Her words delivered the blow that Kael had not been able to weld. He tried to breathe and failed. She was right. Kael had used his bride against him. He had vowed to protect Innocence, and he hadn’t even been able to protect his own wife.

In that instant, he knew his marriage was over.

“Can ye stand?” he asked, his tone rough with emotions he must not yield to.

“Dinna touch me,” she cried furiously.

He stood and stepped aside, just as his brother and MacNeil arrived. Horribly grim, he watched Brogan lift her and carry from the hall. He stared after them, refusing to feel the aching in his heart. He had been a fool to think he could keep a wife and uphold his vows as a Master. He did not blame Brigdhe for hating him now. He hated himself.

MacNeil beckoned him from the tainted hall’s threshold, his handsome countenance set in grim, severe lines. “Ye disobeyed me, Ruari. Ye were told not to hunt Kael alone.”

He was in no mood to argue. “Aye.” And from where he stood, he could see the great healer, Elasaid, tending to the woman who had so briefly been his wife. Never again, he thought.

And MacNeil had been lurking in his mind, because he said, “Aye. Yer a master, lad. Ye’ll stand alone like the rest o’ us. A Master stands alone, fights alone, dies alone.”

“Dinna fear,” he said grimly. He had no intention of ever allowing another woman into his life, much less taking one as a wife. And he would not condescend to any pain in his heart. Not now, not ever. The vows he had made would be his life.

He nodded curtly. MacNeil clasped his shoulder, indicating that they should leave. The fortress would be raised, the ground consecrated. Human prisoners would be taken, demonic ones vanquished. The humans would be exorcized, if possible.

He heard a woman’s soft cry for help.

He stiffened, because the afternoon was entirely silent outside the dark hall.

The air moved around him. A woman whispered his name.

He glanced at MacNeil. “Did ye hear the woman?”

MacNeil looked aside. “There’s no one here but you and me, and no other woman is in this fort.”

He was wrong. A woman had called to him, from the hall—he was certain. Leaving MacNeil, he stepped back into the dank chamber, glancing into every shadowed corner, but no one was present. Then he saw a trap door set in the floor.

He had heard a woman calling for him, as clear as day. He rushed to the trap door and lifted it. And he heard the hissing of snakes. “Get me a torch!” He called.

“There’s no one down there,” MacNeil said firmly. “I’d sense life if it was here.”

A moment later MacNeil handed him a burning torch. He lowered it and saw piles of black, writhing snakes—but the pit looked empty otherwise. Still, he could not be sure. For he felt the woman now, and she was afraid.

He leapt down into the pit, waving the torch, scattering the snakes away from his bare feet. He looked around the small manmade cellar, and realized MacNeil was right. There was no one down there.

He tossed the torch to MacNeil and reached up. A moment later he was walking from the manor, but he remained uncertain and uneasy. He looked back.

The air inside the dark hall fluttered and beckoned. A woman’s fragrance suddenly enveloped him. And he heard her again. Royce…

He seized MacNeil, halting him. “Who is she? Where is she? What does she want an’ why does she call me by my English name?”

“Then where is she?” He did not, could not, understand. And he turned back, overcome. “I must find her.”

MacNeil took his arm, forestalling him. “Ye canna find her now. She’s in the future—yer future.”