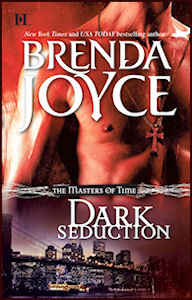 Malcolm of Dunroch is a newly chosen Master, a novice to his extraordinary—and dangerous–powers. But he has already broken his vows–and an innocent woman’s death is on his hands. Malcolm is determined to fight his darkest desires, denying himself all pleasure…until fate sends him another Innocent, the beautiful bookseller, Claire Raynes.

Desire is the first weapon

Since her mother’s murder, Claire has done everything possible to make a safe, secure life for herself in a city where danger lurks on every street corner, especially in the dark of the night.  But nothing can prepare her for the powerful and sexual medieval warrior who sweeps her back into his time—a treacherous, frightening world where the hunters and the hunted are one and the same. Claire needs Malcolm to survive, yet she must somehow keep the dangerously seductive Master at arm’s length. For Malcolm’s soul is at stake—and failing to do so means an almost certain death…

“Bestselling author Joyce kicks off her Masters of Time series with a master’s skill, instantly elevating her to the top ranks of the ever-growing list of paranormal romance author. Steeped in action and sensuality, populated by sexy warriors and strong woman, graced with lush details and a captivating story, this title may not set a new standard in the paranormal/time travel romance genre, but it certainly qualifies as a superlative example.”
—Publishers Weekly

“A keeper—I loved it.”
—Heather Graham

“Dark, dangerous, and sinfully seductive describe not only Joyce’s latest novel, but her latest hero as well.”
—Romance Reviews Today

Claire cried out as a huge, powerful arm locked her in place against what felt like a stonewall. For one moment, as her leapt wildly, she froze. Panic made it impossible to think, time stood still, and she became aware of being held, vice-like, against a huge, powerful and obviously male body.

Her heart was thundering, but suddenly, it slowed. And for one moment, Claire had a shocking sense of familiarity, of recognition—in that moment; fear vanished, replaced only by her acute awareness of stunning male power and strength.

Claire did not understand a single word he said. And her heart slammed and raced and fear clawed at her again. Her instinct was to struggle and she began to squirm, grasping his arms to wrench them off, wishing she had spike heels on, so she could jam one into his booted foot. And as her bare legs came into contact with his thighs, she froze, because his legs were absolutely bare, as well. Claire inhaled harshly.

He spoke in the same guttural language, jerking on her with his huge arm, and she did not have to speak his language to know he was telling her to be still. And as he jerked on her, she felt him stiffen against her backside.

Claire froze. Her captor was aroused, shockingly so, and the sensation of a great, hard length pressed against her was terrifying—and electrifying, too. “Let me go,” she gasped desperately. And two words blazed across her mind: pleasure crime.

He stiffened, but in what she felt was surprise. Then he said, “Put yer weapon down, lass.”

He spoke English, but there was no mistaking the exaggerated Scottish accent. Claire wet her lips, too dazed to even try to consider what that coincidence meant. “Please. I won’t run. Let me go—you’re hurting me.”

To her surprise, his grip eased. “Put the weapon down, be a good lass.” And this time, as he spoke, she felt his stubble against her jaw, his breath feathering her ear.

Chills swept her, her mind went absolutely blank, and she could only think of the powerful pulse pounding against her. Something terrible was happening, and Claire didn’t know what to do. Her body had begun to tighten and thrum. Was this how those women died in the dead of the night? Did they become dazed and confused—and aroused? She dropped the gun and it clattered on the floor but did not go off. “Please.”

Claire somehow nodded. And when he removed his thick arm, she ran to the other side of the hall, whirling and slamming her back there to face him. And she cried out.

She had expected anything but the masculine perfection facing her. He was a towering man, at least six inches taller than she was, hugely muscular, and he was dark. His hair was as black as midnight, his skin bronzed, but he had shockingly pale eyes—and they were trained upon her with unnerving intensity—and surprise.

He seemed just as surprised by the sight of her as she was by him.

She shivered. God, he was handsome. A slightly crooked nose, perhaps broken once, achingly high cheekbones and a brutally strong jaw gave him the look of powerful hero. A scar bisected one black brow, another formed a crescent on one cheek, and they didn’t matter—they merely added to the appearance that this man was battle hardened, experienced, and far too strong for anyone’s good.

But he was a loon. He had to be. Because he was wearing clothing she instantly recognized—a mid-thigh, mustard colored linen tunic, which was belted, and over that, covering one shoulder, a blue and black plaid mantle pinned there with a gold brooch. His thighs were bare, but he wore knee high, heavily worn, cuffed leather boots. And a huge sword was sheathed on his left side, the hilt sparkling with paste jewels. He was costumed as a medieval Highlander!

He looked like the real deal. He had the bulging arms that could have welded a huge broadsword effortlessly in the kind of battle one read about in a history book. But he was a fake. Whoever had made his costume had done their research. His leine looked authentic—as if it had been dyed with saffron—and that blue and black mantle looked hand-loomed. She had to look at his strong thighs again, where his muscles bulged, thighs that looked rock hard from years of riding horses and running hills. Her gaze crept upwards, at whatever was beneath the short skirt of the leine. But of course, she knew what was there. A rigid raised line remained. Claire realized she was ogling him and gaping at the same time, perspiration now running in a stream between her breasts and thighs. She was breathless, but that was because she was afraid of him.

And then she saw that his eyes had lowered to her legs. She blushed.

He lifted his unmistakably heated gaze to hers. “I dinna think to see ye again, lass.”

His smile became seductive. “I dinna like my women to vanish in the night.”