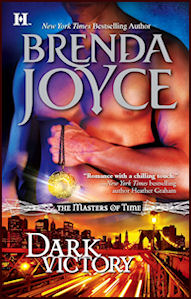 A HIGHLANDER DRIVEN BY VENGEANCE

A dark, ruthless Highlander, the Black Macleod has refused his destiny. His life is revenge for the massacre of his family. His enemies’ insults—that he is a man of stone—only amuse him. But Fate is impatient, and when a woman from another time dares to summon him, he cannot resist her powers—or her…

THE WOMAN WHO WILL SAVE HIM

A schoolteacher by day, Tabitha Rose uses her magic to protect others by night. When the vision of a dark Highlander, bloody and burned, appears to Tabby, she knows she has been called to help him, no matter how frightening he might be. But what Tabby doesn’t expect is to be taken against her will to his dark violent time. And when evil begins to stalk her, she realizes she must fight for far more than his destiny—she must fight for her love…

He didn’t choose his destiny…Destiny chose him

“Joyce’s skillful handling of the many facets of time travel, supported by her ability to create gripping scenes fraught with emotional intensity, are brought to the fore in this fascinating and complex continuation of the Masters of Time series. Her vivid descriptions sweep you into the pages of her compelling story and keep you enthralled. Not to be missed!”
—RT Bookreviews

“Brenda Joyce has another fantastic winner in her Masters of Time series. I could not put this book down! Her Highland warriors are the epitome of the alpha males and she matches her hero well with a tough yet sensitive heroine. DARK LOVER comes out in August 2009 and I can hardly wait!”
— Romance Readers Connection

“DARK VICTORY is the latest Rose novel filled with action and excitement. Tabby starts out as a shy, demure woman who grows into a woman who will do whatever it takes to save the man she loves. Although she doesn’t always agree with his tactics, she knows that he has a good heart if only he would let go of the bitterness of the past but that is easier said than done. Macleod is a man hardened by war and revenge. He can’t give up his hatred that easily even for Tabby. Yet it takes a cataclysmic event for him to really examine who he is and what it means to be not only a man but a Master. I think in the end, both of them grew and matured in ways they never could have imagined. I continue to enjoy all of the characters and there are already hints of potential matches that are sure to be like oil and fire. DARK VICTORY is another great addition to the Rose series and I look forward to Sam’s book.”
—Romance Junkies”

Brenda Joyce’s rendering of the stark contrast between the now and earlier times was masterful. Tabitha’s change in outward demeanor when in the past was an especially nice touch, as women’s rights… weren’t even a consideration then. The pacing, even when jarred by time changes, was exactly as needed for this story and increased the tension of the plot. I enjoyed the author’s other books in this series, but this one is by far my favorite. It’s a bit grittier and the romance a bit darker than the previous books, but the Black Macleod demands nothing less. “Dark Victory” is just as its title declares…a bit dark, but still a victory for love. Now I just have to wait for “Dark Lover”, the last in the Rose trilogy of her ‘Masters of Time’ series. It’s scheduled for release in September 2009.”
—Julie, queuemyreview.com

“Dark Victory is a powerful story about the loss of family, revenge, redemption, the healing power of love, and the ultimate fight between good and evil. Brenda Joyce has given us a passionate love story of two characters searching for their destinies and finding them within each other. Dark Victory should be devoured and then savored slowly by readers. I can’t wait to see what happens in next installment of the Masters of Time.”
—The Mystic Castle

HE DID NOT KNOW what caused him to awaken.

Guy Macleod sat bolt upright in his bed, his wife’s fury engulfing him. Horror began. Tabitha was rarely angry, but now her rage knew no bounds. He went completely still so that his extraordinary senses could locate her. She was supposed to be in Edinburgh, her sister’s guest. Immediately he knew she was not there-and that she was in great danger.

He would die for her without blinking. He never panicked, but now he fought to stay calm, searching for her.

And that was when he felt the familiar evil.

Black and vast, filled with hatred and malevolence, they’d lived with this evil for two hundred and fifty years. Criosaidh had powerful black magic. Tabitha had equally powerful white power. But Criosaidh had been stalking his wife with growing determination, as if impatient, and with a new boldness recently. Tabitha had scoffed at Guy’s concerns. Now, maybe too late, he knew he’d been right.

He leaped from the bed, his gaze veering to the southern chamber window as he shrugged a leine over his muscular and battle-scarred body. The night sky was still and blue-black, glittering with a billion stars. His stare intensified. His senses sharpened. For one moment, even though Criosaidh’s stronghold at Melvaig was almost a day’s journey away by horse, he thought the night sky there on fire. It was so oddly bright in the south. But that was impossible.

Tabitha’s power over fire continually amazed him. He had no more doubt now, Tabitha was at Melvaig—and so was Criosaidh.

His alarm vanished, his fear died. He stepped into his boots, leaping as he did so.

He had mastered the art of the leap through time and space centuries ago and he landed upright, dazed but battle ready, in Melvaig’s large central courtyard. The sky above was on fire.

Incredulous, he saw large balls of fire falling into the bailey. Men, women and children were running for the castle’s front gates, screaming in terror and trying to escape the inferno. For one moment, he wondered if the sun was breaking apart and falling in blazing pieces to the ground, even though he knew better. His gaze shifted. Above the entire stronghold was Melvaig’s tall central tower—and it was an inferno.

Even though stone could not burn, chunks of the gray slabs were falling from the tower, the rocks ablaze, sizzling as they slammed down, only to burn holes into the bailey ground.

The tower swayed in the fiery night and more blazing stone blocks sheered from it, crashing to the earth below.

They were at war.

He did not have the Sight, but suddenly he experienced the strange feeling his wife so often referred to—déjà-vu. He felt as if he were reliving this terrible moment, although he knew he was not.

Only one witch would survive this night.

“Tabitha!” he roared, and bounded to the tower door, leaping to the uppermost floor. As he reached the landing, the heat from the fire inside the tower chamber blasted him, burning his face, chest and hands. He saw the fire, scorching a solid wall across half of the tower room. His wife…trapped against the far wall by the flames, which were dangerously close to her velvet skirts.

Criosaidh stood on the fire wall’s other side, where the rest of the chamber was untouched by the flames. “You are too late, Macleod. Tonight she dies…at last.”

He had never come undone in battle, not once in almost four centuries. The heat had caused him to crouch; he straightened and flung all of his power at her, enraged as never before. “You die,” he roared, but she had wrapped herself in a protective spell, and his power fell harmlessly away from her. As it the floor and was diverted to the walls behind her, rock and stone cracked apart.

Macleod looked at his beautiful wife, who had never before been afraid in a crisis. As their gazes met, he heard her as clearly as ever.

I have known this day would come…you’ve known it, too.

She thought she would be defeated? “No!” he roared at her, blasting Criosaidh again. His life had been an endless cycle of blood and death, his heart had been stone, until she had come to him two-and-a-half centuries ago, bringing joy and happiness with her. Tabitha had saved his life.

Criosaidh smiled as his power was diverted by her spell, again.

“I am trying,” she cried. “She has new powers!” Tabitha closed her eyes, visibly straining. And suddenly the fire wall shifted and moved back toward Criosaidh.

Criosaidh hissed in displeasure. Macleod stood very still. His power could not move fire, but long ago he had learned how to use his mind to help Tabitha cast her magic. Now he slipped inside her with his mind. The union always made them stronger—evil had never defeated them when they became one in their thoughts. It could not, must not, defeat them now.

“Fire be hungry, fire be quick. Get the Macleod bitch,” Criosaidh said harshly

And even has Criosaidh spoke, he saw the tears slipping down Tabitha’s face. She was lost in this battle—and he was afraid it was terrible portent of the outcome. “No!” he roared, blasting the black witch again. This time, taken unawares, she gasped in pain and was driven back into the untouched wall, but it didn’t matter.

Tabitha went still, eyes wide, as the flames circled her.

He seized Criosaidh, shaking her, wanting to break her. “Stop the fire or die!”

She sneered at him and vanished.

In horror, he turned—and saw he lavender velvet gown on fire. And then his wife was engulfed in the flames, only a portion of her frightened face visible to him.

He knew her so well. It had be two-hundred-and-fifty-two years since he had seduced her in her small loft in New York City and then taken her to Blayde—against her very stubborn will. She was his wife, his lover, his best friend and his greatest ally in the lengthy war on evil. She was his partner in every task, both great and small, and she was the mother of his children, the grandmother of his grandchildren. She had taught him love, compassion, humanity. He had never believed in love until she’d come into his life. He’d been ruthless and merciless until Tabitha.

He knew she meant to say more.

Just as he knew there were her last, dying words.

But she did not finish speaking. Instead, the fire erupted, reaching the tower roof, consuming her completely.

Then the fire was gone, and there was only the charred ruin of the tower room.

Across the room, upon the floor, he saw the gold necklace she had worn for two-and-a-half centuries, the amulet he had given her. The talisman was an open palm, a pale moonstone glittering in its center.

It had survived the fire, untouched and unscarred; his wife, who had powerful magic, had not.