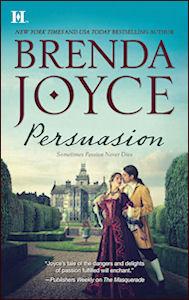 Amelia Greystone was deeply in love when the Earl of St. Jude abruptly ended his courtship and left Cornwall ten years earlier.  So she is stunned when Simon returns, recently widowed.  Now she must forget the past they shared and his betrayal and console him as any neighbor would.  Simon has changed—he is dark and haunted now—but he can still make her reel with a single look.  When he offers her the position of housekeeper, Amelia knows she must refuse.  But for the sake of his children, she throws all to caution to the wind…

PASSION WILL RENUITE THEM

A British spy, Simon Grenville is now playing both sides in a time of war, his goal to keep his sons safe.  But when he is brought face-to-face with the woman he once loved, he realizes nothing about his feelings for Amelia has changed—if anything, they are even stronger.  Still, Simon knows he must stay away from Amelia; his life is too dangerous now.  But sometimes passion is too strong to be denied…

“Joyce continues her Spymasters Men trilogy as a double agent plays a dangerous game of love. In her usual fashion there is a dose of history and romance, with engaging characters, depth of emotion and drama.”
— RT Bookreviews

Grenville sat at the head of the long table at the other end of the room, facing the doors. The table was set beautifully with linen and crystal for one. Tall white candles formed a centerpiece. He was eating, seeming preoccupied, when she barged inside. He looked up; she halted. Staring from across the great room, he laid his utensils down.

Amelia hesitated, then turned and closed the doors. The ensuing conversation should probably remain private. She hoped that cornering him now was not a huge mistake.

Turning, she was aware of some dread—was she baiting the lion yet again in his den? It certainly felt that way.  She started grimly forward, straining to make out his expression.

Grenville continued to stare as she approached. Only a short distance separated them when he finally laid a gold cloth napkin on the table and stood up. “You could not stay away, I see.”  He did not smile.

She paused when two chairs separated them, grasping the back of one. He did not look well. He had shaved, but there were shadows under his eyes, which were bloodshot. He was pale, in spite of his olive complexion. He was impeccably dressed in a navy blue coat, his shirt frothing lace at the throat and cuffs, his breeches fawn, his stockings white. But his hair had been pulled carelessly back into a queue. He looked as if he had spent a very long night carousing, which, for all intents and purposes, he had.  “I remain concerned about the children.”

“But your concern does not extend to me?”

She decided to ignore the taunt.  “Are you feeling better today?”

“I feel exactly the way I look—like hell.”

She bit back a smile. “One must pay the piper,” she said tartly.

“Hmm, I think you are pleased to see me suffering so.”

“You could hardly think that you would escape the consequences of such a binge unscathed?”  She lifted her brows.  “But I am not pleased if you are feeling ill.”

“I do not believe,” he said slowly, his gaze unwavering upon her face, “that I was thinking at all.”

A silence fell. No, he had not been thinking, he had been feeling— he had been angry and grief-stricken. He had also been very, very suggestive. Amelia glanced away, finally breaking the stare they shared.

He gestured at the chair she was grasping. Amelia saw the gesture from the corner of her eye and shook her head, glancing at him again. “I am not staying long.”

She tensed. Had there been mockery in his tone? But clearly, he remembered their encounter.

Abruptly, he said, “Why are you here… Amelia?”

Her heart lurched. He did not sound pleased. “I told you, I wish to make certain the children are well. And yes, some concern extends to you.”

She stared closely at him, but if he was mocking her now, she could not tell. His expression was hard.

“I was just thinking about you,” he said, staring down at the edge of the table. Then he looked up, his gaze dark. “I was thinking about the encounter we shared last night.”

There was so much tension, of course there was. Amelia waited, uncertain of where he meant to go.

His gaze held hers. “My recollection is patchy. But I believe I owe you an apology.”

She inhaled. Hopefully he did not recall very much! “You do.”

She hesitated, because he had been far more than rude—he had been bold, he had referred to their past affair several times, and he had been entirely seductive. “It doesn’t matter, your apology is accepted.”   She was final.

But he was not. “I tried to seduce you.”

She stiffened, wondering if she could deny it.

“I happen to remember holding you in my arms. Did I seduce you?” he asked, almost casually.

She exhaled. He did not remember the extent of their exchange?  “No, you did not.”

He glanced aside, and she had no clue as to what he was thinking. Then, very softly, his gaze frighteningly direct again, he said, “But we kissed.”

She was almost speechless now. She wasn’t sure whether his mouth had brushed her cheek, but that wasn’t what he meant. Then she whispered, “No, Simon, we did not kiss.”

She was surprised by his surprise. And there was so much tension in the room, between them, that it was hard to breathe. Or was all the tension coming from her? “I’d like to see the children,” she said, hoping to rapidly change the subject.

“Are you certain?” he asked, as if he hadn’t heard her.