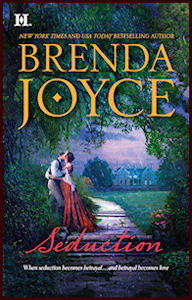 Dominic Paget, the earl of Bedford, will do anything to protect his identity so he can resume spying upon Britain’s enemies in the war. Badly wounded, he is put in the care of a beautiful and impoverished gentlewoman, Julianne Greystone, only to discover that her sympathies lie with his enemies. Now he must carefully seduce the woman who has saved his life—hoping she never learns of his betrayal. But on the eve of his return to London, Julianne discovers the truth….

Julianne never meant to fall in love with the wounded stranger she was caring for. And she has never despised anyone more than the earl of Bedford, for he is not the revolutionary hero she believed him to be. Determined to forget him, Julianne returns to London to agitate for the Jacobins in France. Yet when she is seized by the authorities for her endeavors, it is Bedford who comes to the rescue. Now Julianne must navigate the intrigues of London, the wild yearnings of her own heart and the explosion of their passion…

THE SPYMASTER’S MEN
In dangerous times, they will die for love of country—and for love.

“Joyce begins a new series set during the late 1700s when the spirit of revolution was sweeping France. Merging depth of history with romance is nothing new for the multitalented author, but here she also brings in an intensity of political history that is both fascinating and detailed.”
— RT Bookreviews

“All I can say is WOW! I couldn’t put the book down… There was intrigue, mystery, suspense, love, romance, heartache and tears. If you haven’t read books by Joyce before I highly recommend you do. You won’t be disappointed.”
— Romancing The Book

The voice surprised him. It sounded far away. And even as he heard the Englishman, pain stabbed through his back and shoulders, like nails being driven into his body, as if he were being crucified. The pain was so horrific he could not speak, but he cursed silently. What had happened?

He was on fire now. Even worse, he wondered if he was suffocating. He could hardly breathe. A terrible weight seemed to be pushing him down. And he was in absolute darkness….

But his mind was beginning to function. The man who had just spoken was English, but that was impossible. Where was he? What the hell had happened?

And the images began, rolling through his mind’s eye with shocking speed, accompanied by horrific sounds—the bloodcurdling screams of the wounded and the dying amidst the racket of muskets and the boom of canons, the river running red with the French blood of peasants, priests, nobles and soldiers….

He moaned. He could not quite recall how he had been wounded, and he was afraid he might be dying. What had happened to him?
Someone spoke, and the voice was familiar. “He is barely alive, Lucas. He has lost a great deal of blood and has been unconscious since midnight. My surgeon does not know if he will live.”

“What happened?” A second Englishman was speaking.

“We suffered a terrible defeat at Nantes, messieurs, a rout by the French under General Biron, but Dominic was not wounded in the battle. He was ambushed outside my apartments last night by an assassin. ”

And then he realized that his lifelong friend, Michel Jacquelyn, was speaking. Someone had tried to murder him—because someone had known he was a spy.

Dominic managed to open his eyes, a vast, prolonged effort of will. He lay on the beach on a pallet, under blankets—the surf beat the shore and the night above glinted with stars. Three men stood over him, in coats, breeches and boots. His vision was blurred, but he could distinguish them somewhat. Michel was short and dark, his clothes bloodstained, his hair pulled back in a queue. The Englishmen were tall and golden, their shoulder-length hair whipping in the wind. Everyone was heavily armed with pistols and daggers. Now, he heard the creaking of wood masts, the flap of canvas, the pounding of wind-whipped waves. And then he could no longer keep his eyes open. Exhausted, they closed.

He was going to faint, damn it….

“Were you followed?” Lucas asked sharply.

“Non, but le gendarmerie are everywhere, mes amis. We must make haste. The French blockade the coast—you will have to be careful to avoid their ships.”

The other Englishman spoke, and he sounded cheerful. “Have no fear. No one can outrun the navy—or the revenue men—like me. Captain Jack Greystone, monsieur, at your service on this highly interesting night. And I believe you already know my brother, Lucas.”

“I do. You must get him to London, messieurs,” Michel said. “Immédiatement.”

“He won’t make it to London,” Jack returned. “Not alive, anyway.”

“We’ll take him to Greystone,” Lucas said flatly. “It’s close—and safe. And if he’s fortunate, he will live to fight another day.”

“Bien. Keep him well—we at La Vendée need him back. God speed you