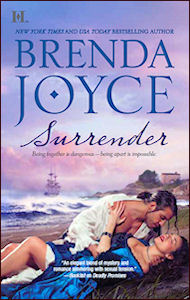 Once a penniless orphan, Evelyn D’Orsay became a countess and a bride at the tender age of sixteen. Recently widowed and without any means, Evelyn knows she must retrieve the family fortune from France so she can raise her daughter in Cornwall—but only one man can help her… the smuggler she cannot forget.

Jack Greystone has been smuggling since he was a small boy—and he has been spying since the wars began. An outlaw with a bounty on his head, he is in hiding when he becomes aware of the Countess’s inquiries about him. He is reluctant to come to her aid yet again, for he has never been able to forget her and he wants to avoid her intrigues. But he soon realizes he’ll surrender anything to be with the woman he loves.

Being together is dangerous—being apart is impossible..

“SURRENDER is the third wonderfully entertaining addition to Brenda Joyce’s SPYMASTER’S MEN series, and it is a page-turner.”
—Romance Junkies

“The third of the Spymaster’s Men is as dangerous and intriguing as readers could desire. Joyce sweeps readers into the frightening world of the French Revolution, a treasure hunt and grand passion.”
—RT Bookreviews

IT HAD BEGUN TO DRIZZLE, and as Evelyn looked up at the dark, cloudy sky, she knew it would soon rain. She shivered as the wind picked up, but she had just reached the iron front gates at the head of Roselynd’s drive.

Ahead, Roselynd was a three-story square house, statuesque in impression, and very current in design. Cast of pale, nearly white stone, it stood out eerily in the darkness. All the windows were dark except for one on an upper floor, which she happened to know was Laurent and Adelaide’s room.

It was later than she had thought, and her poor mare was tired—it had been a long difficult week for her, with all the traipsing about that Evelyn had done. The mare had hardly been used in the months prior.

She felt a pang, thinking of Henri, and a stirring of anger as she thought about the predicament she was in. Very firmly, she told herself that he had not left her destitute by choice; the revolution had done that.

She halted the mare before the barn, and as she did so, she heard Laurent calling to her. She smiled as she slipped from the gig, and Laurent approached from the house. “I was becoming very worried about you, madame.”

“I am fine. I had a very good conversation with my uncle, Laurent, and if I am fortunate, he will locate Greystone for me.” She was too tired to tell him about Trevelyan, and decided she would do so tomorrow. “It is later than I thought. Is Aimee awake?”

“She is asleep, and Adelaide has left a covered tray in your rooms. I will put the mare away.”

She thanked him, as the drizzle turned abruptly into a pounding rain. They both cried out, Laurent hurrying the mare into the stables, as Evelyn pulled up her skirts and ran for the house.

Inside, she slammed the front door closed, breathing hard. The front hall was in darkness, which pleased her— why waste candles to light the entry when she was the only one expected? Evelyn removed her soaking cloak. The rest of her clothes remained dry, but her shoes and stockings were wet. Her cloak over her arm, Evelyn went upstairs in the darkness, going directly to Aimee’s room. As Laurent had said, she was soundly asleep. Evelyn pulled the covers up, kissing her forehead, the rain now pounding on the windows and the roof above their heads.

In her own bedroom she lit a single taper, hung up her cloak and removed her wet shoes and stockings. Thunder boomed. Just after it did, she heard Laurent entering the house, the front door closing. She felt a moment of relief, for, like a child, she disliked fierce storms. But now, the mare was settled and fed for the night, Laurent was on his way upstairs and the house was securely locked.

She removed the pins from her hair, which always made her head ache at this time of the day, letting it down. As she shook her hair out, she realized that she was exhausted. Undressing would be a chore, but she somehow removed her gown and underclothes, donning her white cotton nightgown. In France, the loose but luxurious garment with its puffed sleeves and lace trim was called a robe innocente.

She was just about to uncover the tray Adelaide had left for her and try to eat a morsel or two when she heard a movement downstairs. She stiffened, alarmed, until she realized that it was the sound of a shutter banging against the side of the house.

She was going to have to close those shutters—she would never sleep with all of that banging. Evelyn took the taper she had lit and hurried down the hall. Then she hesitated, and as the wind ceased, the rain became a quiet steady pitter-patter and the shutter was silent.

She jumped, her heart skipping, and scolded herself for being a fool. Now she heard nothing but the gentle steady rhythmic rain.

She was about to turn and go back to her room when a light went on below her.

And then, as she inched closer to the top of the stairs, she realized that a taper had been lit in the salon.

Her heart thundered with alarm.

She stared down the stairs, across the entry hall and into the salon, which was in shadow, but clearly, a single light shone within.

Someone was in her salon.

She almost called out, hoping it was Laurent, but he had gone up to the room he shared with Adelaide—she was certain.

She needed a gun. She had a pistol under the mattress of her bed. Should she seize it, or should she get Laurent? And as she debated what to do she saw a man cross the salon.

His stride had been unrushed, indolent—familiar.

Every hair on her nape had risen. Now her heart slammed.

He came to the doorway of the salon, holding a drink in his hand, and looked up at her.

And even in the shadows, even as their gazes locked, there was no mistaking who he was.

“I hear you are looking for me,” Jack Greystone said.