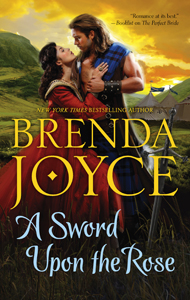 New York Times bestselling author Brenda Joyce takes you back to the Highlands, where the battle for land, liberty and love rages on…

They left the next morning. The sun was high, but it had snowed the previous afternoon and night, and a fresh fall blanketed the road and the woods. The mountains surrounding them were white. Alana rode in a small wagon with her grandmother, driving the mule in the traces. Godfrey had not cared that Eleanor wished to accompany her, and had given them a single man as an escort. Connaught rode beside them, a mail tunic beneath his fur cloak.

The wagon and the snow made the going slow. In the mid-afternoon, when they were but a short distance from the castle, Alana stiffened.

She did not need a vision to know it. She simply sensed danger, and as she did, she noticed a gray pall beyond the line of trees that lay ahead. She smelled smoke.

“There is a fire nearby,” the soldier said sharply, abruptly drawing his mount to a halt.

But Alana heard the horses whinnying in fright,  saw the glow of a fire beyond the trees. And was she imagining it or did she hear men shouting in fear and agony?

Because the sounds of the horses and men were so familiar—exactly like the sounds in her last vision!

Her heart slammed. “Can you go ahead and see what is happening? Without being remarked?” she asked Connaught.

“Aye.” He spurred his horse aggressively forward, galloping away.

Alana felt entirely exposed, sitting in the wagon with her grandmother, on the deserted and snowy road, no longer hidden by the surrounding woods.

Eleanor took her hand. “We should turn back.”

She hesitated. “I am wondering if we are about to encounter the battle from my vision, Gran.”

Eleanor’s eyes widened as Connaught galloped back to them. “They have attacked the MacDuffs’ home, Boath Manor! They are burning it to the ground! And they carry Bruce’s flag!”

Alana’s tension increased. “Surely Bruce’s army is not beyond those trees?” she cried.

“It is but a few dozen Highlanders, mistress. Still, they are warring with Duncan’s men.”

Her heart thundered. They were but minutes away from a terrible battle, a part of the great war for Scotland’s throne.

“Turn the wagon, Mistress Alana,” Connaught ordered. “We must go back before we are discovered.”

She thought of the dark-haired Highlander who had been betrayed by one of his own men. If she was about to encounter him—and witness such treachery—she could not go back. She did not know why, but she was compelled to warn him.

Alana began to get down from the wagon. “Will you take Eleanor back to Brodie?”

“Alana,” Eleanor gasped. “You cannot stay—we must turn around!”

“I have to see what is happening. But I will hide in the tress, I promise you.” Before she had finished speaking, she could hear the men shouting, the horses neighing, more loudly. The battle had moved closer to them.

She turned, and she could see the fire on the other side of the trees far more clearly, bright and brilliant. “You’ll never outrun them with a wagon. But damned if I will die to save an old woman and a witch.” Suddenly Connaught was galloping away.

Alana choked, shocked that he would leave them there—two women alone and defenseless!

“Alana, if they are coming this way, you must hide! Forget me!” Eleanor’s eyes were wide with fright.

Alana reached for the mule’s bridle. “I am not forgetting you, Gran. Let’s get you hidden.”

“And what about you?” Eleanor demanded. “I am an old woman. My life is done. You are young. Your life is ahead of you!”

“Do not speak that way! Come.” Alana led the mule and the wagon off the road, no easy task. The mule was balking and unruly, while the snow became deeper, until finally the wagon was stuck. But they were off the road, and not as obvious as they had been. In any case, she could not coax the mule any farther.

Alana glanced around and saw an outcropping of rocks. She could leave Eleanor in the wagon—or hide her in the cavern there.

Alana nodded. “I will not be long.” She covered her grandmother with a second fur.

Eleanor took her hand. “I am frightened for you. Why, Alana? Why won’t you hide here with me?”

Briefly, Alana stared. What was wrong with her? Why did she wish to see if the battle just beyond the woods was the one from her vision? Why was she determined to warn the dark-haired Highlander of treachery? Perhaps sparing him any injury—and saving him from death?

“I am coming back. I am not leaving you here.” She hugged her, hard.

Eleanor clasped her face. “Your mother was stubborn and brave, too.”

Alana somehow smiled and hurried off.

She was too agitated to be cold, as she trudged through the snow back to the road. She headed toward the line of trees that lay ahead, and the sounds of the battle became louder as she approached it. The stench of smoke and fire increased. Filled with fear and dread, her pulse pounding, Alana reached the edge of the wood. She halted, grasping a birch to remain upright.

Her vision was before her, come to life!

The manor was aflame, and English knights and Highland warriors were in a savage battle before it. The snow was blood red. Swords rang, horses screamed. And then a steed went down, the Highlander astride it leaping off….

Shaken, she felt her knees buckle. But she did not collapse. Frantically, she scanned the fighting men.

A fur flung over his shoulders, bloody sword in hand, long dark hair loose, the Highlander was viciously fighting an English knight. Their huge swords clashed, shrieking, again and again, in the midst of the bloody, battling men.

He looked exactly as she had envisioned him.

Alana was stunned. What did this mean? To happen upon one of her visions this way?

Screams sounded from within the manor.

The Highlander heard them too. He sheathed his sword and rushed to the door, which was burning. Flames shot from an adjacent window. He rammed his shoulder into it.

And then he suddenly turned and looked at the woods—as if he was looking at her.

For it almost felt as if their gazes had met, which was impossible.

Within a moment he had vanished inside the burning manor. Flames shot out from the walls near the door.

Alana did not think twice. She began to run out of the trees, toward the battling men—toward the manor.

He appeared in the doorway, a small boy in his arms. A woman and another child ran past him; he let them go first. As he ran out of the house, more of the flaming roof crashed down. He dove to the ground with the child, protecting the boy with his body.

Alana tripped, fell, got up.

He had risen, too, and was ushering the boy into his mother’s arms. Then he whirled to face her.

This time, Alana knew she was entirely visible. This time, in spite of the warring men between them, she knew their eyes met.

For one moment, she paused, breathing hard as they stared at one another, in surprise, in shock.

And then she saw the man behind him. He was approaching rapidly, and was but a short distance away. His hair was shaggy and red.

Her heart seemed to stop. This man meant to betray his fellow Highlander, meant to murder him. “Behind you!” she screamed.

The Highlander whirled, sword in hand. Apparently he did not see any danger, for he faced her again. But the red-haired Scot held a dagger and his strides were unwavering….

Alana tried again. “Behind you! Danger!” As she cried out, he whirled, and his assailant swiftly stabbed him in the chest. Almost simultaneously, the Highlander thrust his sword through the traitor, delivering a fatal blow. Slowly, the other man keeled over.

The Highlander looked across the battle at her, staggered, and fell. His blood stained the snow.

Alana heard herself cry out. She began to run toward him again. The English knights who remained mounted were galloping away. Those on foot who could flee were doing so. All that remained was the small, victorious Highland army, the wounded, the dying and the dead.

Alarm motivated her as never before. She had to swerve past bodies, and she tripped on a dead man’s outstretched arm. Someone tried to grab her; she dodged his hand. And then she reached him.

She dropped to her knees in the snow, beside him. “You are hurt,” she cried.

His blue gaze pierced hers, and he seized her wrist, hard. “Who are ye?”

She felt mesmerized by his hard blue eyes. They were filled with suspicion. “You’re bleeding. Let me help.” But his grip was brutal—she could not move.

More about A Sword Upon the Rose here

Welcome to the world of the Francesca Cahill—crime-solver extraordinaire!

An irrepressible heiress and intrepid sleuth, Francesca Cahill is engaged to one of the city’s most notorious millionaire bachelors, Calder Hart. But Francesca is far more interested in solving ghastly crimes than in taking tea. Her pursuit of thugs, madmen and murderers takes her from the glittering salons of Fifth Avenue into the dangerous, crime-ridden underbelly of lower Manhattan. And more often than not, the city’s powerful Police Commissioner, Rick Bragg, is at her side, because first love never really dies.

Welcome to the truly remarkable world of Francesca Cahill, Calder Hart and Rick Bragg, a world where pride, passions and prejudices always collide… 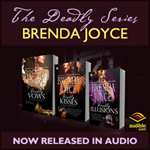